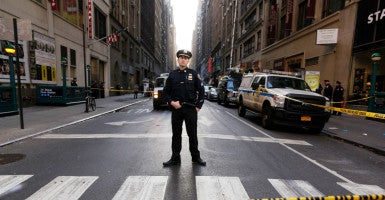 In 2014, the Justice Department and Treasury Department netted $4.5 billion through civil forfeiture. Civil forfeiture gives law enforcement the power to seize cash, cars and houses if they suspect the property is tied to criminal activity. (Photo: Brendan McDermid/Reuters/Newscom)

For federal state and local law enforcement agencies, a little-known practice giving them the power to take Americans’ property, cash, and cars has proven to be a boon over the last decade.

According to a new report from the Institute for Justice, a public interest law firm, the federal government has seen a substantial increase over the last 13 years in the amount of money deposited into forfeiture funds governed by the Departments of Justice and Treasury—the two federal agencies that typically conduct forfeitures.

Additionally, from 2001 to 2014, the Justice Department and Treasury Department deposited a combined $29 billion in their respective forfeiture funds, the Institute for Justice found.

“One of the most basic economic principles is that incentives matter, and they matter not just to individuals but also to groups,” the Institute for Justice wrote in its report. “In allowing agencies to keep some or all of what they forfeit, civil forfeiture laws permit, if not encourage, law enforcement to police for profit. And agencies have responded with zeal.”

Civil forfeiture is a tool that gives law enforcement the power to seize cash, cars, and houses if they are suspected of being related to a crime. Originally, the tool was viewed as a way to combat drug trafficking and money laundering. However, as law enforcement budgets have become increasingly strapped for cash—and forfeiture proceeds have increased—civil forfeiture has been dubbed “policing for profit” by critics.

In recent years, a growing number of stories have arisen involving innocent Americans who had property forfeited yet were never charged with a crime. Additionally, civil forfeiture has been called a “gold mine” and “pennies from heaven” by the very law enforcement officials who benefit from the proceeds of cash, cars, and property forfeited.

In just seven states and the District of Columbia, law enforcement is prohibited from accessing forfeiture proceeds. In several of those states, such as Missouri and New Mexico, all of the proceeds from cash, cars, and houses seized go directly into each state’s general fund.

However, in the remaining 43 states, more than 45 percent of forfeiture proceeds are directed back to police departments and prosecutors. At the federal level, agencies using civil forfeiture to seize property can keep 100 percent of the proceeds.

Law enforcement’s ability to keep the proceeds from cash, vehicles, and houses seized has provided police and prosecutors with a direct profit incentive, the group warned.

“These allowances represent a significant opportunity for agencies to self-fund through civil forfeiture, and evidence suggests that agencies are taking full advantage,” the group said in its report.

In response to backlash from critics of civil forfeiture, who argue the practice is being abused by law enforcement, more than a dozen states have introduced or passed legislation to protect property owners and make it more difficult for law enforcement to forfeit property from innocent Americans.

Despite these challenges to civil forfeiture in state houses and the federal courts, law enforcement agencies across the country still have a way to skirt state restrictions on civil forfeiture and adhere to federal forfeiture laws instead.

Law enforcement agencies participating in the Equitable Sharing program receive up to 80 percent of the proceeds from the cash, vehicles, and houses seized, and in 2014, more than 3,000 state and local agencies participated in the program, the Institute for Justice found. From 2000 to 2013, the Justice Department payments to local and state law enforcement agencies participating in Equitable Sharing topped $4.7 billion, according to the group’s report. Additionally, payments tripled from 2000 to 2013.