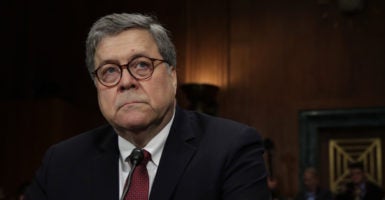 Attorney General William Barr says acting Bureau of Prisons Director Hugh Hurwitz will return to his former role as the assistant director of the agency and help oversee the implementation of the First Step Act. Pictured: Barr testifies before the Senate Judiciary Committee on May 1 in Washington, D.C. (Photo: Alex Wong/Getty Images)

“I have asked Mr. Hurwitz to return to his responsibilities as assistant director of [Bureau of Prisons’] reentry services division, where he will work closely with me in overseeing the implementation of one of the Department’s highest priorities, the First Step Act,” Barr said in a statement.

Barr replaced Hurwitz with former Bureau of Prisons Director Kathleen Hawk Sawyer, who served as bureau director from 1992 to 2003. Monday’s appointment is the second time Barr has selected Sawyer to lead the Bureau of Prisons—he was attorney general when she was selected for the post in the waning days of the first Bush administration. Thomas Kane will serve as Sawyer’s deputy.

“Under Dr. Hawk Sawyer’s previous tenure at the bureau, she led the agency with excellence, innovation, and efficiency, receiving numerous awards for her outstanding leadership,” Barr said. “I am confident Dr. Hawk Sawyer and Dr. Kane will lead [Bureau of Prisons] with the competence, skill, and resourcefulness they have embodied throughout their government careers.”

Congressional lawmakers in both parties have pressed the Justice Department to investigate the circumstances surrounding Epstein’s death and hold negligent parties accountable. GOP Sen. Ben Sasse of Nebraska sent Barr a particularly blistering letter on Aug. 10, warning the attorney general that “heads must roll” within the department.

“The Department of Justice failed, and today Jeffrey Epstein’s co-conspirators think they might have just gotten one last sweetheart deal,” he wrote. “Every single person in the Justice Department—from your Main Justice headquarters staff all the way to the night-shift jailer—knew that this man was a suicide risk, and that his dark secrets couldn’t be allowed to die with him.”

Barr has been similarly severe in his public assessments of the situation, saying he was angry and appalled with prison officials at the Metropolitan Correctional Center, a federal facility in New York City where Epstein was incarcerated while awaiting trial for the sex trafficking of minors in New York and Florida.

“Let me assure you that this case will continue on against anyone who was complicit with Epstein. Any co-conspirators should not rest easy,” the attorney general said during remarks to the Fraternal Order of Police in New Orleans on Aug. 12.