What Makes This Houston Ballot Measure So Threatening 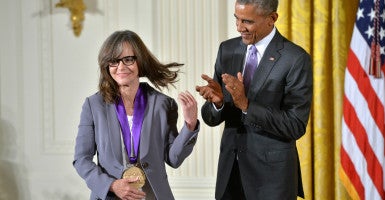 In 2014, Oscar-winning actress Sally Field, who is campaigning for the Houston ordinance, received the 2014 National Medal of the Arts. (Photo: Kevin Dietsch/UPI/Newscom)

On Tuesday, citizens of Houston, Texas, will go to the polls to vote on a controversial “sexual orientation and gender identity” (dubbed SOGI) measure.

Rather than protecting equality before the law, the SOGI ordinance, euphemistically named the Houston Equal Rights Ordinance (HERO), creates special legal protections based on “sexual orientation and gender identity.”

HERO does not clearly define what actions count as “discrimination” on the basis of sexual orientation or gender identity. Indeed, HERO leaves entirely unclear what actions could be accused of being discriminatory.

As a result, HERO would impose new, and potentially ruinous liability on innocent citizens for alleged “discrimination” based not on objective traits, but on subjective and unverifiable identities. HERO would further increase government interference in markets, potentially discouraging economic growth and job creation.

But the damage of HERO is not only economic. It also threatens the freedom of citizens, individually and in associations, to affirm their religious or moral convictions—convictions such as that marriage is the union of one man and one woman, and that maleness and femaleness are objectively rooted in biology, and should be valued and affirmed, not rejected or altered.

Under HERO, acting reasonably on these beliefs could be made illegal. After all, HERO is modelled on other SOGI laws that have been used to penalize bakers, florists, photographers, schools, and adoption agencies.

HERO is exceedingly broad and goes well beyond the definition of “public accommodations” in the Civil Rights Act of 1964. HERO states: “Place of public accommodation means every business with a physical location in the city, whether wholesale or retail, which is open to the general public and offers for compensation any product, service, or facility.”

Every business in the city open to the public would be subject to this law. So whereas the Civil Rights Act of 1964—which sought to combat institutionalized state-endorsed racism and integrate the South—defined public accommodations as entities such as hotels, restaurants, theaters, and gas stations, HERO would now define more or less every private business which is open to the public as a place of “public accommodation.”

HERO has implications for bathroom, locker-room, and other sex-specific facilities. The proposed law defines gender identity as “innate identification, appearance, expression, or behavior as either male or female, although the same may not correspond to the individual’s body or gender assigned at birth.” No legal change of name or gender, and no surgery or hormone treatment is required to identity as transgender—simply one’s self-professed and chosen identity, appearance, mannerisms, or behavior.

What does this mean? The school board of Fairfax County, Va. provides an example.  In May 2015, the school board voted ten to one to add “gender identity” to its list of protected classes—against overwhelming opposition from parents at the school board meeting. Dustin Siggins, writing at The Federalist, explains the likely consequences of the move:

The consequences of the board’s decision are clear: Boys who think or feel they are girls will be allowed to use restrooms and locker rooms of the opposite sex. If the board follows the example of Minnesota, schools would have to accommodate male transgendered students who want to spend nights at travel games in hotel rooms with female athletes.

Americans should respect the equal dignity of their neighbors, but SOGI laws do not protect true equality before the law. The reasons for resisting SOGI laws are becoming clear.

Market competition can provide more nuanced solutions for particular situations that are superior to a coercive, one-size-fits-all government policy on sexual orientation and gender identity. Local schools should be free to develop individualized policies to address the needs, including the safety and privacy needs, of their students, parents, and teachers.

The same is true for businesses. Having various employers who hold a wide variety of religious beliefs or moral commitments makes it more likely that employees can find a good fit while limiting the chance of discrimination. After all, employers all compete with each other for the best employees. They have incentives to consider only those factors that truly matter for their mission. And businesses all compete with each other for customers. So they have every reason to accept business unless it really does conflict with their deepest commitments.

All citizens should oppose unjust discrimination, but sexual orientation and gender identity laws like HERO do not further that goal. HERO is neither necessary nor cost free, and it threatens fundamental First Amendment values. Instead of government regulation and coercion, we should embrace the best of the American tradition: liberty under law.