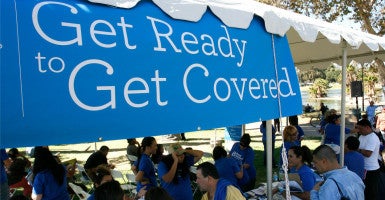 A 10th co-op created under Obamacare has collapsed.

Combined, the failed nonprofit insurance companies have received more than $1 billion in loans, with more than 600,000 consumers affected.

The latest casualty, the Utah Insurance Department, announced yesterday that Arches Health Plan, a consumer-oriented and operated plan, or co-op, will not sell insurance in 2016. The co-op received $89.7 million in loans from the federal government.

“It is regrettable that the co-op model has not worked across the country,” Utah Insurance Commissioner Todd Kiser said in a statement. “I want to assure you that the Utah Insurance Department supports the state’s free market and works to help businesses succeed. We are proactively working with other insurers and the federal government to fill the vacancy left by Arches, particularly in the rural areas of the state.”

Co-ops were created under the Affordable Care Act as a way to inject competition into markets where few health insurance choices existed. Nearly 50,000 consumers purchased plans through Arches Health Plan, and the co-op notified those customers that they will need to buy new insurance plans beginning Nov. 1 to have coverage next year.

“We’re not mad. We really don’t fault any particular group or individual. I think what’s very sad about this is we were designed to become sustainable, and we did that based on the original structure of the [Affordable Care Act],” Tricia Schumann, chief marketing and communications officer for Arches Health Plan, told The Daily Signal. “It’s these changes that have come along that compromised our position.”

Such changes include lower than expected risk corridor payments, which the state Insurance Department pointed to as the primary reason for the co-op’s closure.

The risk corridor program, enacted under Obamacare, is intended to stabilize the health insurance market. Earlier this year, insurance companies requested specific risk-corridor payments from the government. However, the Obama administration announced two weeks ago that those providers would receive just 12.6 percent of their requested amount.

“We were relying on [the payments] to support the unanticipated risk in the market, which is what I understand the program is designed to do,” Schumann said. “We’re not a Medicaid expansion state, so we believe that we took a high level of risk in the commercial plans in Utah.”

A July report from the Department of Health and Human Services’ inspector general found that Arches, along with 21 of the 23 total co-ops, lost money in 2014. Arches Health Plan was projected to experience just a $5-million shortfall but lost $19.9 million.

So far this year, 10 co-ops receiving more than $1 billion from the government have collapsed. Five of those—in Colorado, New York, Kentucky, South Carolina, and Utah—attributed their decision to close because of the risk corridor payments.

The 23 co-ops received $2.5 billion from the Centers for Medicare and Medicaid Services when they were created.