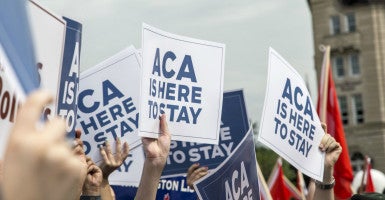 The Centers for Medicare and Medicaid Services issued a rule making it easier for co-ops to seek private capital. (Photo: Bill Putnam/Zuma Press/Newscom)

The Obama administration is changing its rules for the remaining 11 co-ops started under Obamacare to now allow them to more easily attract outside investors, paving the way for states and large hospital systems to potentially inject cash into the struggling nonprofit insurers.

The Centers for Medicare and Medicaid Services issued an interim final rule last week allowing the remaining consumer operated and oriented plans, or co-ops, to solicit financing from private investors and allow state government agencies and investors to place lower-level officials on the co-ops’ boards of directors.

Allowing states to exercise some control of the co-ops’ governance provides them with an incentive to give the nonprofit insurers a much-needed infusion of cash, Ed Haislmaier, a senior fellow in health policy at The Heritage Foundation, told The Daily Signal.

“It makes it easier for a state to put somebody on the co-op board [of directors] in exchange for giving them a bailout because they could under this rule put a state employee or state official [on it], probably someone with expertise,” he said. “That might make a bailout more palatable.”

The 23 co-ops created under the Affordable Care Act started with $2.4 billion in startup and solvency loans from the federal government. However, 12 of the nonprofit insurers closed their doors after losing millions of dollars and learning they were getting far less than expected through Obamacare’s risk corridor program.

The remaining 11 co-ops, meanwhile, lost a combined $400 million last year, according to Politico.

In the past, co-ops weren’t expressly barred from seeking financing from the private sector, but federal loan agreements made it difficult for those nonprofit insurers to secure financing.

Additionally, Haislmaier said neither banks nor venture capitalists were likely to provide additional loans or capital to the nonprofit insurers given their structure and high default rate—the Office of Management and Budget predicted in its 2015 budget that 43 percent of co-ops would default on the loans they received.

“A bank is more willing to lend money to go out and go fracking rather than lend to a co-op,” Haislmaier said, “and venture capital money isn’t going to go in there because there’s no way to monetize if it’s successful. A venture capitalist will invest in a firm if it’s high risk and then high reward.”

Loosening the rules regarding the co-ops’ boards of directors and private financing makes it possible for states to offer up more taxpayer dollars to the co-ops while also maintaining some level of oversight.

“I think it’s going to be difficult for a state legislature to justify giving them the money without some condition on it,” Haislmaier said. “This may make it easier for them to do it.”

Other potential investors, he said, are hospital systems with “deep pockets.”

“Most likely is a state bailout,” Haislmaier said. “The second most likely is a hospital system. They might be able to infuse cash in exchange for a preferential relationship.”

In addition to changing the definition of the term “representative,” the Centers for Medicare and Medicaid Services also changed the makeup of the boards of directors.

The government will now also allow those who aren’t members of the co-op to serve on the boards, opening the door for investors and entities extending loans to sit on the panel.

The rule from the Centers for Medicare and Medicaid Services is an about-face for the Obama administration, which has hailed the nonprofit insurers as competitors of larger, for-profit insurance companies selling coverage on the exchanges, but also characterized the co-ops as startups entering a complex market.

For the co-ops still operating, the administration hopes that allowing the co-ops to seek financing from private investors will help their short- and long-term viability.

“CMS is committed to help strengthen the health insurance marketplace,” Aaron Albright, spokesman for the Centers for Medicare and Medicaid Services, told The Daily Signal in an email. “We are encouraging the co-ops to consider seeking additional sources of capital as they plan for the year ahead.”

Since their launch at the start of Obamacare’s first open enrollment period, more than half of the nonprofit insurance companies have closed their doors after recording millions of dollars in losses and enrolling a population that was sicker and costlier than anticipated.

However, industry experts believe that the new rule will help ensure the remaining 11 co-ops survive.

“Access to additional capital has long been one of the co-ops’ top concerns, and we appreciate CMS’s willingness to clear some of the governance hurdles that have made investing in the co-ops difficult for potential investors,” Kelly Crowe, CEO of the National Alliance of State Health Co-Ops, said in a statement.

“CMS may try questionable, ad hoc methods to shore up the failing co-ops at the expense of taxpayers, but little is likely to change until the administration realizes their experiment is failing and reverses course,” Hatch said in a statement to The Daily Signal. “Instead, with this rule, the administration regrettably puts enrollment numbers ahead of financial viability and protection of scarce taxpayer dollars.”

“It’s not clear this [rule] is going to make much of a difference,” he said. “First of all, there’s a bunch of [co-ops] gone. I think rightly people will be skeptical at the state level of throwing good money after bad if the perception for the few [co-ops] that remain is they’re in trouble.”

In January, Centers for Medicare and Medicaid Services Acting Administrator Andy Slavitt told members of Hatch’s committee that his agency would be open to allowing private financiers to invest in the remaining 11 co-ops.

“We need to make it easier for co-ops to attract outside capital, or a merger partner,” Slavitt told lawmakers. “I want to loosen up the capital rules so we can lengthen the runway.”

He didn’t elaborate at the time as to what changes his agency would make.

The rule from the Obama administration, released last week, comes as the Department of Health and Human Services prepares to decide which of the co-ops will be financially stable enough to continue selling coverage on the exchanges. The agency will determine this summer whether the nonprofit insurers should participate in the 2017 open enrollment period.

Created under the Affordable Care Act, the co-ops were designed to inject competition and choice in areas where little existed. Originally, 23 co-ops launched with $2.4 billion in startup and solvency loans from the federal government.

The majority of the 12 failed co-ops cited lower payments from Obamacare’s risk corridor program as the reason for their failure. In October, the Obama administration announced the nonprofit insurers would receive just 12.6 percent of risk corridor payments they each requested, delivering a blow to those who were counting on the funding to boost their financial outlook.

Slavitt hasn’t definitely said whether the 12 failed co-ops will repay the more than $1.2 billion they received in loans. However, he has told lawmakers that the Centers for Medicare and Medicaid Services is working with the Justice Department to recoup the money.