Saving Face While Capitulating: Congress and Its Debt Limit Plan 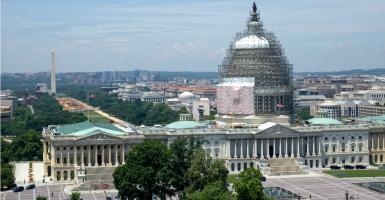 The debt limit is upon Congress, challenging lawmakers to address rising spending and debt with serious budget reforms.

While the administration and its supporters demand a “clean,” no-strings attached increase in the $18.1 trillion debt limit before Nov. 3, the GOP is struggling to maneuver. They’re in effect trying to save face before the American people while still meeting the administration’s demands.

The Republican Study Committee, a group of conservative lawmakers, has proposed a plan to address the problem, which the (still) House speaker, John Boehner, R-Ohio, must sell to the rest of his conference.

Dubbed the “Terms of Credit Act,” the plan features many of the right buzzwords—like “Balanced Budget Amendment”—but arrives without imposing any real fiscal discipline. It would allow Congress to increase the debt limit by $1.5 trillion to take the debt issue off the table until well-past the presidential elections (March 2017).

What exactly is the Republican Study Committee asking for in exchange for the increase in the debt limit?

They’re asking mostly for procedural changes to require Congress to show more effort in actually implementing its budget plan. While Congress’ budget plan proposed to balance the budget before the end of the decade with more than $5 trillion in spending reductions, little action has taken place since the plan passed in April to actually implement the budget.

The Republican Study Committee debt limit plan sets a timeline for congressional committees to produce the bills to arrive at the savings reductions targeted in the budget plan. That’s one small step in the right direction.

There are certainly provisions from the Republican Study Committee plan that mirror Heritage’s Blueprint for Congressional Action, yet unfortunately the plan does not go nearly far enough.

Its drafters only plucked the low-hanging fruit from the Heritage plan and any substantive reforms are painfully absent.

How does the Republican Study Committee plan to enforce spending reduction targets?

Not with a statutory spending cap that would impose automatic cuts should Congress fail – which would impose real fiscal discipline, but instead their plan calls for preventing adjournment by the House after 150 days if the House fails to pass legislation that meets the spending reduction targets.

Again, while this is better than Congress doing nothing to prepare legislation to implement its budget, it falls far short of what’s needed to justify a $1.5 trillion increase in the debt limit.

Reconciliation is also the very process that already exists to draft the bills to comply with deficit-reduction called for in the budget. Plus, there is already a rule that disallows the House from adjourning if it fails to complete reconciliation work.

But of course, Congress found a way around that too – as it seems they always do.

Congress needs a real plan to pursue legislative proposals in the budget plan with the seriousness the nation’s fiscal state demands, Congress should limit the debt limit increase to a much lower amount to allow for only a short-term patch while the relevant congressional committees finally do what they should have done long ago—write the bills to comply with the congressional budget.

Alas, the real motivation seems to be to save face while really doing nothing much at all to address the debt problem.