The Dirty Secret of How Washington ‘Balances’ the Budget 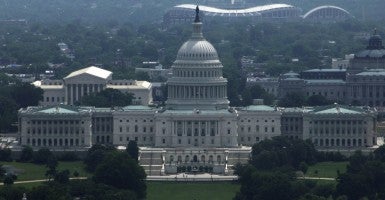 For the first time in more than five years, Congress has passed a budget plan. The plan would balance the budget by 2024—but only if Congress were to enact additional enabling legislation that would actually accomplish the savings included in their budget. That’s a huge “if.”

This is one of Washington’s dirty secrets. Members of Congress get to claim credit for passing a budget that balances without being held to the task of actually accomplishing this feat.

Congress’ budget plan merely establishes a blueprint for balancing the budget. Without separate legislation to implement the reforms and spending cuts it calls for, the plan is simply a collection of non-binding messages about policy priorities—nothing more. A balanced budget remains elusive.

What, then, did the congressional budget resolution accomplish? It set the total level of discretionary funding for fiscal year 2016, which begins on October 1, 2015. Discretionary spending encompasses about one-third of the budget and funds most government agencies and the salaries of federal workers.

But Congress also did more harm by opening the gates for loopholes that allow lawmakers to get around those spending caps. The budget allows lawmakers to allocate $38 billion more than requested by the president to the Overseas Contingency Operations account. While the account was originally set up to finance operations in Iraq and Afghanistan, it has since developed into a well-known slush fund for the base defense budget. The budget also allows for $19 billion in spending through changes in mandatory program spending (CHIMPS). By limiting or delaying mandatory spending, lawmakers claim phony savings on paper that are unlikely to ever materialize. Together these gimmicks add up to at least $57 billion in additional deficit spending.

The resolution also provided instructions to relevant congressional committees to draft legislation to repeal Obamacare using a vehicle, called reconciliation, which can pass in Congress with a simple majority vote. For many this was the most important goal for Congress’ budget resolution: Get a bill on the president’s desk to repeal his signature achievement.

Even if President Obama had a 180 degree change of heart about his health care law, repealing Obamacare alone will not balance the budget in 10 years or less. Repealing the president’s health care law certainly is an important first step toward controlling growing health care entitlement spending and would pave the way for market-based and patient-centered health care reform that empowers individuals. However, broader spending reforms are necessary to balance the budget and keep it balanced.

Most importantly, Medicare is projected to consistently grow faster than the economy. While the latest Congressional Budget Office report projects annual economic growth (before inflation) at 4.3 percent, Medicare is projected to grow by 6.6 percent. While the House supported moving to a premium support system for Medicare in its budget, the Senate was unwilling to support this commonsense reform which would improve health care choice for seniors and save seniors and taxpayers money.

Further discouraging is that Congress increased Medicare spending with its “doc-fix” bill in April. Congress was cheered for eliminating the threat of large cuts to physician payments, but failed to fully offset the resulting spending increase, thus increasing the deficit.

Major health care programs and Social Security are responsible for 60 percent of the projected growth in spending over the next decade. Any serious budget should prioritize reforms to slow spending growth in these areas.

To responsibly balance the budget, Congress should:

Prioritize Defense Spending: The core duty of the federal government is to provide for the common defense. The defense budget ought to be based on the nation’s security strategy and an assessment of the military capabilities required to meet it. Unnecessary domestic spending should make way for responsible defense funding.

Address Growing Health Care Spending: Congress should repeal Obamacare including about $2 trillion in new spending and $800 billion in taxes associated with the health care law. Medicaid should be put on a budget, and Medicaid beneficiaries should be able to purchase private insurance of their choice, granting individual enrollees more control over the care and services they receive. Importantly, Congress should transform Medicare into a premium support program that uses a defined contribution model of financing. This would make Medicare both fiscally responsible and patient-centered, benefiting both seniors and taxpayers.

Cap Welfare Spending: Welfare spending should be reduced, and then capped at the rate of inflation. Welfare programs should require able-bodied recipients to work, look for work, or prepare to return to work to help recipients return to independence.

Reform Social Security: The Social Security disability program is approaching insolvency before the end of next year, and the retirement program is already running a cash flow deficit. Congress should enact structural reforms to Social Security to avoid indiscriminate cuts in benefits to society’s most vulnerable, without increasing the debt or tax burden for future generations. Such reforms should include raising the retirement age and indexing it to longevity. Congress should further phase in a flat benefit model. Price indexing, as proposed by Rep. Paul Ryan (R-Wis.), is one way of getting there. Moreover, as a real insurance system against poverty due to disability or disabling old age, benefits should focus on those individuals who need them the most.

Reform the Tax Code: Congress should simplify the tax system by lowering marginal tax rates and by eliminating the capital gains tax, death tax, tax carve-outs, foreign income taxes and any tax on savings. An improved tax system would allow the economy to grow faster and create more opportunity for Americans to earn higher wages and build successful businesses. This in turn would alleviate anti-poverty spending and the debt burden.

Congress took an important first step in passing its blueprint to balance the budget. To truly balance the budget, Congress must take the next step and pursue spending and tax reforms legislatively. Repealing Obamacare is merely the beginning.