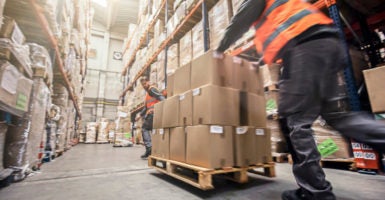 According to Friday's jobs report, the U.S. private sector produced 98,000 jobs in March while the unemployment rate fell to 4.5 percent. (Photo: iStock Photos)

It appears that the “Trump bump,” based on confidence from President Donald Trump’s election, has subsided as job creators await Washington’s next concrete steps on taxes or trade.

On the positive side, the jobs report shows that the unemployment rate dropped to 4.5 percent (the lowest since 2007) from 4.7 percent last month, the number of people who were working part time but preferred full-time jobs fell by 151,000 to 5.6 million, and wages rose 2.7 percent from last year.

Of more concern is the labor force participation rate, which factors in people who have given up looking for work, and which remained unchanged at a low 63 percent. This suggests that tens of millions of Americans are still having a hard time connecting with the workforce.

Long-term unemployment—which accounts for those who are jobless for 27 weeks or more—is also still a problem, accounting for 23.3 percent of those currently unemployed. This number, however, is trending downward over the last few months.

Though the payroll survey found only a small increase (due to weather conditions) in construction job hiring, it also found that retail trade (-30,000 jobs) and general merchandise stores (-35,000 jobs) continue to cut jobs, most likely from the increase in online competition.

>>> Here Are 6 Reasons to Lower the Corporate Tax Rate Immediately

Taking a broader look at the economy, while this report did not fully meet expert predictions on jobs numbers, various reports do show that business—especially small business—has the highest optimism in decades. This is no doubt due to the change in tone from the White House.

To continue instilling economic confidence, it is imperative that words are backed up with action.

The Trump administration and Congress have made a good start on rolling back excessive regulation, and need to follow up with tax reform that lowers rates on both small and large businesses and allows for immediate expensing for new job-creating investments.

This will bolster confidence for years to come. There are several reasons why the jobs report didn’t meet expectations. But one thing is certain: Employers hire and grow when they have a predictable, friendly business climate.

If conservatives band together and act on the regulatory and tax reforms they campaigned on, the “Trump bump” can become the new “business as usual” in Washington.