Why Hispanics Thrive in Texas, But Not in California 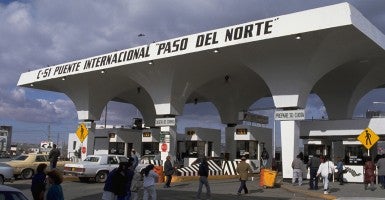 The world provides us with countless case studies on the relative merits of free markets and central planning. In Asia and Europe we have seen the controlled experiments of the Koreas and the two postwar Germanys, admittedly extreme examples. In South America, we have consistently successful Chile and perennially chaotic Argentina.

In this country, we have Texas and California. Their comparative performances are being followed with avid interest by the other 48 states.

Readers of this paper will have seen enough comparisons between the economic growth and job production of the two economies, and those points do not need to be belabored here. But in one point, at least, Texas edges out California: As I discovered while writing a book published last week, Hispanics enjoy much better statistics across the board in the Lone Star State than in the Golden one.

The relative advantage that Hispanic Texans have in key cultural indicators is strongly related to the state’s dynamic economic growth and small government. But because Texas’ smaller government has allowed civil society to grow organically, there is a strong cultural background that must be considered.

In fact, when factoring in both economic and cultural factors, one can say that California and Texas stand for two completely different faces of the Hispanic experience in America or, more to the point, the Mexican-American experience. The question is whether the two states will continue to lead two different Mexican-American subcultures in the future, or whether one approach will come to be the dominant one nationwide.

Let’s first look at the statistics, starting with one of the most important ones: unemployment. In 2013, Texas’ Hispanic population boasted an unemployment rate of 6.9 percent. That was more than 2 percentage points lower than the national Hispanic average (9.1 percent). More important, it was better than the overall national average of 7.4 percent and only six-tenths of a percent higher than Texas’ overall rate (6.3 percent). One thing that may account for the lower Hispanic unemployment in Texas is that Hispanics in the Lone Star State are much more entrepreneurial than those in the Golden State. Texas’ rate of Hispanic-owned businesses as a percentage of the Hispanic population is 57 percent, whereas California’s is 45 percent.

The stereotype, of course, is that Texas’ success is predicated on low-paying, so-called McJobs. That’s untrue, the Dallas Fed’s Pia Orrenius told me for my book. Low regulations and taxes have attracted businesses, and that has led to labor demand and therefore competitive wages. “On an adjusted-wages basis, Texas has relatively high wages among the least-skilled, compared to the rest of the nation,” she said.

Moving on to social statistics, Texas’ Hispanics also score favorably on matters to do with the family. This is important, as two-parent households have proved to be the best anti-poverty program ever invented, and illegitimacy stands upstream from many social problems.

Hispanics in the Lone Star State are much more entrepreneurial than those in the Golden State.

And in this key cultural indicator, Texas’ Hispanics also outperform California’s. According to the Census Bureau, the former are less likely to have had a child out of wedlock than the latter, 39.8 percent to 42.6 percent.

One of the most eye-popping statistics I have come across is that Hispanics in Texas are much more likely to live in an owner-occupied home than those in California (56.8 percent to 42.9 percent).

In terms of religiosity, the General Social Survey does not break down information at the state level but shows that Hispanics in Texas are far more likely to attend church services regularly. One is tempted to assume that California Hispanics are less religious than the national average for Hispanics.

Given the array of statistics offered above, it is hardly surprising that Texas’ Hispanics also out-compete California Hispanics in what may be the most important statistic of all after the rate of illegitimacy: educational performance. The National Assessment of Educational Progress, a congressionally mandated project known as “the nation’s report card,” is pretty definitive in its 2011 report about which state has done better by its Hispanic students. The educational gap between Hispanics and non-Hispanic white students is much smaller in Texas than in California, where it is statistically significantly higher than it is in the rest of the nation.

In all four measures, Texas outperformed the rest of the nation; California was either the worst performer or among the worst. As I conclude in my book, if California’s aim was indeed separatism, it seems to have succeeded — and failed its Hispanic population. Texas’ approach appears to be working, however.

It is hard, if not impossible, to separate these facts from the two very different approaches the two states take to the economy and life in general. To say that California’s government plays an expansive role in people’s lives is to severely understate the situation.

California’s 34 percent is not just the highest; the state is the only one in double digits. New York, which has the second-largest percentage of active welfare cases in the country, has a comparatively miserly 7 percent of the nation’s caseload.

By contrast, Texas, with 8 percent of the U.S. population, has only 3 percent of the U.S. welfare caseload, for an underrepresentation rate of 35 percent. Texas’ rate is the third-lowest in the country, undercut only by thinly populated Wyoming and Idaho.

So it is hardly surprising if family and educational statistics are worse for California Hispanics than for those in Texas. Welfare undermines the family, “and the effect is large,” as the American Enterprise Institute’s Charles Murray put it long ago in his classic study of social policy, Losing Ground. Broken families, in turn, lead to social pathologies, including underperformance by children at school.

California consigns a much larger percentage of its population to the welfare rolls than does Texas, and Hispanics, overrepresented among the lower-income quintiles, will suffer even worse from all the above. History, though, also plays a part. It has given the population in Texas a cultural stake that may be providing the winning edge in stability that is reflected in these statistics.

Texas and California have some strong similarities. We’re talking about the two most populous states in the Union, home to 27 million people and 38 million, respectively.

In both states, nonwhite Hispanics make up the same percentage of the population: about 38 percent. And both are “majority-minority” states, where no one group has an outright majority. In California, Hispanics became the largest group earlier this year. Texas has not yet reached what people refer to as “the tipping point.”

Famously, both California and Texas were settled by Spain and were briefly part of Mexico after its independence from Madrid in 1821. People can be forgiven, therefore, if they see the Hispanic population of both states as monoliths. But there the similarities end.

The pre-existing Mexican populations in the two states were very different. Texas’ was large, estimated between 15 percent and 25 percent of the population of the new state. We’re talking possibly as many as 50,000 so-called Tejanos.

By contrast, California’s Mexican population was small when Mexico ceded the state — maybe around 10,000 when it entered the Union in 1850. These “Californios” were swiftly overwhelmed by the hundreds of thousands who flocked to the state starting with the Gold Rush of 1848.

As Joshua Treviño, vice president for communications at the Texas Public Policy Foundation and a proud multigenerational Texan, told me for my book: “California Hispanics have a very tenuous thread to the past. I lived in California for several years and cannot remember a single time when someone said to me, ‘Oh, I’m a descendant of one of the original Californians.’ They’re all recent imports, going back at most to the 1920s.”

These roots have helped a great deal to deepen Texas’ culture of self-help, small government, low regulation, patriotism and entrepreneurship among the state’s large Hispanic population. At the other end stands California’s model of large transfer payments, putting significant portions of the population on the dole, and more divisive identity politics.

The results are bare for everyone to see. All in all, they make the Lone Star State a golden one for Hispanics.