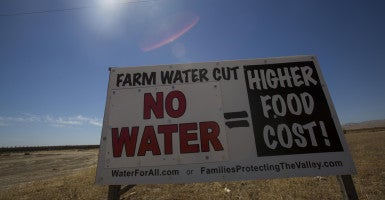 A sign referencing the drought is posted on the side of the road in Mendota, Calif. (Photo: Ringo Chiu/ZUMA Press/Newscom)

SACRAMENTO—If California flew a state flag that truly represented its popular culture, it’s possible we’d have not the Bear Flag, but a guy shrugging his shoulders and the word “Quicquid”—Latin for the state’s unofficial motto, “Whatever.”

California residents have reacted to the state’s increasingly draconian water cutbacks with the well-known “whatever” spirit. They’ve significantly exceeded Gov. Jerry Brown’s water-conservation goals and tolerated rising water prices without taking to the streets in protest.

But the state’s ongoing water wars did, for a short time, lead to some civil disobedience, even though it was barely mentioned in the media. As local TV news stations focused on browning lawns and Brown’s  press conferences—the most famous of them beamed from a spot in the Sierra Nevada mountain range that ought to be covered in snow—a group of feisty rural water officials was resisting state and federal orders to deploy water for fish rather than people. The local officials had angry farm customers at their backs, but  the resistance didn’t seem to get the notice of the governor or last more than a few hours.

In the brief uprising, in April, the Oakdale Irrigation District east of Modesto held its public meeting to discuss government demands to release “pulse flows” from Lake Tulloch—a small, district-controlled reservoir in the Sierra Nevada foothills. Those pulse flows, large water releases, were designed to help about a dozen fish—not 12 species, but 12 individual fish—swim from the lake through the Stanislaus River and out to the Delta and then to the Pacific Ocean.

Biologists at Fishbio, a firm that counts fish in the river on behalf of water agencies, note that these fish are unlikely to get far down the river before more aggressive invasive species eat them. Once in the Pacific, they’re fair game for anybody with fins and a face. It’s hard to overcome the food chain. But that didn’t stop the feds—at the urging of California state officials—from insisting on these pulse flows.

Management of the dams and waterways involves a complex network of local, state, and federal agencies. The feds control the large New Melones Reservoir, which feeds Lake Tulloch, which is controlled by the local agriculturally oriented irrigation district. The feds were releasing the water, but the locals vowed not to release the water from Lake Tulloch. The agencies had previously inked a deal allowing the locals to keep water levels higher until spring, but “fish concerns,” as the Modesto Bee put it, were forcing earlier flows.

As one board member asked at that meeting, “what if we tell them to go to hell?”

The protest was averted by a last-minute deal, but this was serious stuff. I was at that Oakdale meeting and the farmers and water officials were angry that the state and feds were not relenting even in this time of drought. The locals called for flexibility, for different standards during periods of drought. State and federal officials basically say their hands are tied by the federal Endangered Species Act, as if laws cannot be revised to reflect a particularly difficult situation.

This wasn’t the only instance of strange water priorities. A Modesto Bee article focused on a proposed project to help 500 to 1,000 salmon a year swim around the Don Pedro Reservoir near Turlock. Depending on the ultimate cost of the project (estimated at between $70 million and $150 million), the per-fish figure would range between a whopping $70,000 and $300,000 per salmon. That’s a lot of money for a fish that consumers can buy in the grocery store for $6 a pound.

These aren’t odd scenarios. The tiny Delta Smelt is an endangered fish that regularly causes regulators to shut down the pumps at the State Water Project, which send Sacramento River water southward. “To protect smelt from water pumps, government regulators have flushed 1.4 trillion gallons of water into the San Francisco Bay since 2008,” wrote Allysia Finley in the Wall Street Journal. “That would have been enough to sustain 6.4 million Californians for six years.”

When I first learned about the Delta Smelt situation, I thought the state was shutting water supplies to protect an entire species of fish—something that might be more understandable. But officials find just a handful of dead smelt in the fish screens at the Tracy pumps each year. As Finley explains, despite the enormous costs of using so much water to save the smelt, the fish continues its decades-long decline. The situation certainly says much about the state’s priorities—and the “success” of its ongoing policies.

Those 1.4 trillion gallons of arguably misspent water resources are only a small portion of the smelt-related costs. Gov. Brown has been championing something called the Bay Delta Conservation Plan. It is essentially a project to build twin tunnels underneath the Sacramento-San Joaquin Delta—the West Coast’s largest estuary, and home to that particular species of smelt—to provide more reliable water supplies from the (usually) wetter northern part of the state to the farms and cities in the more arid southern regions.

The total price tag was $25 billion for tunnels, plus billions more for ecological restoration. The administration has since revised its plan and now calls it the California Water Fix. The smaller, $15.5-billion project removes a portion of the habitat restoration and uses gravity rather than large, clanging pumps to move water at the north end of the Delta. The change was driven by the refusal of federal environmental agencies to provide a 50-year operating permit—something they said was unreasonable, given changing environmental conditions.

As I argued in my previous article, the tunnel proposal—whether in its original or reduced form—is an engineering solution to a political problem. The imperiled smelt often cause administrators to shut down the water pumps. Rather than revise the political rules governing the smelt, the state is proposing at least $15 billion in spending to restructure water flows throughout the region. How much will that end up costing on a per-smelt basis?

One could argue this isn’t totally about a small number of fish, but about overall ecological restoration. Yet when the governor announced the new plan, he said: “We can’t just cross our fingers, hoping for the best in the Delta. Fish populations are at an all-time low. Bold action is imperative. We’ve listened to the public and carefully studied the science. This revised plan is the absolute best path forward.”

It certainly sounds like it’s about the fish. But if it is, it’s worth noting that there’s enormous disagreement about whether the plan will even improve their habitat. Environmentalists who oppose the project say it won’t. “The Delta Water Tunnels would instead destroy endangered and threatened fish species,” said Robert Wright, senior counsel for Friends of the River, in a statement. “The Tunnels would divert for the Central Valley and State Water Project vast quantities of freshwater from the Sacramento River near Clarksburg that would no longer flow through the lower Sacramento River, sloughs, and Delta,” he added. “This would jeopardize the continued existence of endangered and threatened species of fish and adversely modify their designated critical habitat by taking away freshwater flows for Winter Run Chinook salmon, spring-run Chinook salmon, Central Valley steelhead, green Sturgeon and Delta smelt.”

Biologists will argue, but the main arguments center on fish habitats—not on the effect of such policies on taxpayers, water users, property owners, and farmers. In a government-controlled water system, the prices of water—or fish—rarely reflect the actual costs of the product. That leads to myriad problems, with urban water users and farmers using their political clout to keep the water flowing at nicely affordable and highly subsidized rates. But there’s little question that these groups are left fighting over the water that isn’t used to protect some fish.

Many times, the regulators are trying to protect fish that aren’t native to the area. Some environmentalists have long criticized the state’s system of dams and seek to demolish some of them to return rivers to their natural state. Yet often the fish being saved wouldn’t even live that far inland if not for the dams. Without the dams, some rivers would run dry in the summer months. Often the fish being saved are the products of hatcheries—and almost certainly will be eaten by other species somewhere along their journey to the sea.

The smelt are big swimmers compared to plankton, tiny organisms that do not swim at all. But the California Coastal Commission is holding up a Huntington Beach desalination plant because of its potential impact on plankton.

In reality, there’s no sense blaming plankton, smelt, trout, or salmon. The problem is state and federal officials more concerned about bureaucratic and environmental priorities than people.

This reality causes head-scratching in the rare instances it is reported on. People often don’t believe it. “You mean the state really is lowering a large reservoir to protect about a dozen hatchery-bred salmon?” they’ll ask me skeptically. “The governor really is planning to spend tens of billions of dollars on tunnel project largely because of a smelt?”

As long as Californians shrug it off in that “whatever” way, it’s unlikely anything is going to change. I imagine that as long as water comes out of our taps, there’s little chance for civil disobedience, widespread protest—or anything more than a few grumbles.