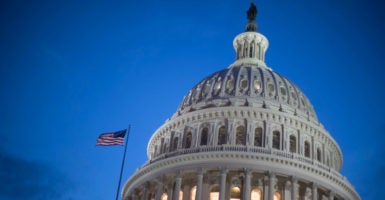 Senate Democrats are attempting to attach a pension bailout bill for the United Mine Workers of America to an unrelated waiver for President Trump's nominee for U.S. trade representative. (Photo: Michael Reynolds/EPA/Newscom )

What does Robert Lighthizer, President Donald Trump’s nominee for U.S. trade representative, have to do with pension and health care benefits for one group of retired coal miners?

Nothing. But that hasn’t stopped congressional Democrats from holding up a necessary waiver on Lighthizer’s confirmation by insisting on attaching it to a completely unrelated bill that would provide an unprecedented federal bailout of private pensions.

That unrelated bill is the Miners Protection Act. It would provide billions of dollars to cover the unfunded pension and retiree health care benefits of one particular union: the United Mine Workers of America.

Lighthizer’s confirmation requires Congress to grant a waiver because, as a trade lawyer, he represented the foreign government of Brazil in negotiations with the U.S. over an ethanol trade dispute.

Although the Miners Protection Act did not receive a floor vote at the end of 2016, Congress did pass a short-term provision to provide health insurance to more than 10,000 retired coal miners that otherwise could have lost their coverage.

That temporary extension expires April 18. But Sen. Orrin Hatch, R-Utah, has since introduced a bill that would extend retiree health care benefits for those workers without taking the unprecedented move of granting a federal bailout for a private union pension plan.

Opening the door to private pension bailouts would be a horrible risk for taxpayers. The United Mine Workers of America’s pension plan is one of about 1,300 union or multiemployer plans, and its $5.6 billion in unfunded liabilities represents only the tip of the iceberg.

According to the Pension Benefit Guaranty Corporation, a whopping 96 percent of multiemployer pension funds have set aside less than 60 percent of the funds they need to pay their promised benefits, creating a shortfall of more than $600 billion.

And that’s only private, union-run pension plans. Non-union pension plans also have hundreds of billions of dollars in unfunded pension liabilities and state and local governments have promised an estimated $5.6 trillion more than they’ve set aside to pay.

The waiver required for Lighthizer’s nomination as trade representative has nothing to do with the pension and health care benefits promised by one particular coal mining union. The fact that Senate Democrats are holding this waiver hostage shows their desperation to pass an otherwise unpopular government bailout.

While it would be a shame for Senate Democrats to prevent Lighthizer from receiving a fair confirmation process based on his merits, the stakes are too high for Republicans to cave.

The Miners Protection Act would provide a multibillion-dollar bailout to one select union and open the door to hundreds of billions—if not trillions—of dollars in future taxpayer bailouts for private and public pensions across the country.