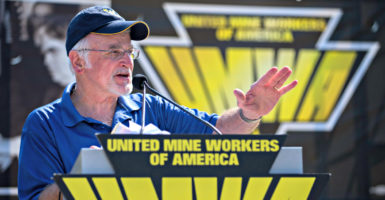 Cecil Roberts, president of United Mine Workers of America International, speaks Sept. 8, 2016, at a rally of retired mined workers and their families outside the U.S. Capitol. (Photo: Shawn Thew/EPA/Newscom)

It’s not every day you see a significant portion of Republican senators supporting a taxpayer bailout—especially for a private union pension plan.

But today, six of the 14 Republican members of the Senate Finance Committee joined with Democratic counterparts in favor of a multibillion-dollar bailout of the United Mine Workers of America’s pension and health care plans.

Among the six Republican supporters was the committee’s chairman, Sen. Orrin Hatch of Utah. (The complete vote breakdown is below).

Now that the bailout bill—S.1714, the Miners Protection Act—has been voted out of committee, it could face a vote on the Senate floor before the end of the year.

Republicans typically recognize that bailouts set a horrible precedent and encourage reckless behavior, and that’s why they consistently oppose them. So how did this happen? How did a Republican majority just help set the stage for what could become a multitrillion-dollar bailout of private and public sector pensions?

It turns out that some Republican policymakers are opposed to taxpayer bailouts in principle, but not if those bailouts disproportionately benefit them and their constituents.

The powerful United Mine Workers of America (UMWA) union has lobbied hard in support of a taxpayer bailout, going so far as to publicly endorse a Republican co-sponsor of the bailout bill.

Campaign contributions from certain coal industry interests could have been a factor as well. It’s also possible that pure sympathy for the plight of mine workers is at play.

While it is tragic that up to 100,000 mine workers stand to lose a good chunk of their promised pension benefits, the government did not make those promises. And it can’t be in the business of retroactively insuring those benefits on a case-by-case basis, essentially picking winners and losers based on the alleged blood, sweat, and tears that workers poured into their jobs.

Yet that’s precisely the precedent that passage of the Miners Protection Act would set.

If a union can attract members by offering safe and secure retirement and health care benefits decades in the future, fail to negotiate adequate contributions to actually pay for those benefits, and then pass the unfunded costs on to taxpayers, then why not?

That’s a huge competitive advantage. The same goes for private businesses or state and local governments that want to provide workers higher compensation without actually having to pay for it.

Unfortunately, as the bill garnered 18 “ayes” and only eight “no” votes, it appears that politics—not principles—won the day.

This is great news for about 100,000 active and retired UMWA coal miners, and it could be good news for many of the 40 million workers who are covered by other private or public pension plans.

Unfortunately, it is terrible news for the roughly 280 million other Americans without pensions who could soon find themselves on the hook for trillions of dollars in overpromised and unfunded pension benefits across the country.