This Movie Could Teach D.C. Politicians How to Budget Better 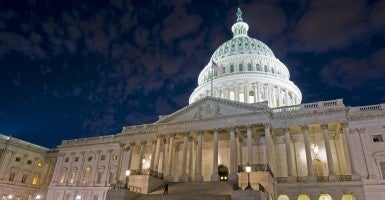 Much of the U.S. budget is flying on auto-pilot and on course to crash. Congress should grab hold of the steering yoke.

In the 1980s comedy “Airplane!”, Otto, the inflatable doll, takes over as auto-pilot when the cockpit crew becomes incapacitated because of food poisoning. To prevent a crash and safely land the plane, an ex-pilot with flight anxiety named Ted eventually takes control of the situation.

Washington can learn quite a bit from watching this classic.

Congress has placed two-thirds of the budget on autopilot—and this share is growing rapidly. If Congress fails to take control of the growth in entitlement spending soon, it soon will become almost impossible to prevent a fiscal crash, followed by a vastly larger tax burden.

Congress should take charge of the budget process by taking the biggest and fastest growing government programs off auto-pilot.

It is budget season in Washington with current funding bills set to expire by September 30. The House and Senate are proceeding at faster pace than usual this year towards completing the 12 spending bills that appropriate funding for defense and domestic agencies and programs. Yet even if Congress passed all spending bills on time this year—a feat the people’s body has not accomplished since 1997—the appropriations process covers a decreasing one-third of the $3.5 trillion U.S. budget.

Most of the growth in spending today and in the near future comes from large entitlement programs put in place decades ago and set to grow on autopilot. Over the years, these entitlements became very popular, leading many politicians to stay away from proposing any reforms in fear of electoral outrage. Those in and near retirement who draw from Medicare, Social Security, and increasingly Medicaid as well, are also the most active at the voting booth.

These programs, and rising interest on the massive federal debt, are the key drivers of spending. The federal government could stop all other spending and it would still head towards a fiscal crash. Social Security, Medicare and Medicaid, and interest on the debt, are projected to consume all tax revenues by 2030.

During the most recent financial crisis, a bipartisan group of experts in the Brookings-Heritage Fiscal Seminar, agreed on three key steps to take the entitlements off autopilot:

While these steps alone fall short of structural entitlement reforms that would provide Americans with real insurance against hardship, they would pave the way for much-needed debate and deliberation on the structure and financing of these programs.

Taking over the piloting from auto-pilot Otto still leaves Congress to decide which direction to take the budget. Robust structural reforms they could adopt include moving to patient-centered, market-based healthcare with premium support, and implementing a flat Social Security benefit that focuses on old age poverty relief.