How Racial Quotas Are Hurting Minority Kids in Connecticut 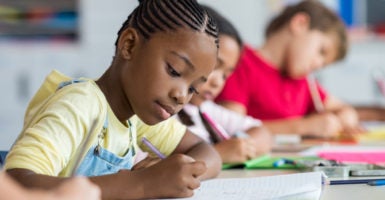 "Children deserve to be treated fairly, regardless of their race," says parent and plaintiff Gwen Samuel. (Photo: Ridofranz/Getty Images)

Connecticut has put in place diversity quotas for certain magnet schools, meaning the racial breakdown of those schools has to stay relatively fixed. That policy is backfiring on the state, which is now being sued by parents—largely African American—saying that it adversely affects their kids. I recently sat down with Gwen Samuel, the plaintiff in that case, and today we’ll share that exclusive interview. Plus: CNN’s Jim Acosta says the media is doing a great job and there’s no bias. Rachel and I will discuss.

Daniel Davis: I’m joined now by Gwen Samuel. She is from Meriden, Connecticut, and she is the founder of the Connecticut Parents Union, which is involved in a court case against the state of Connecticut in school education. Gwen, thanks for joining us on the podcast today.

Gwen Samuel: Thank you, young man, for having me.

Davis: Gwen, tell me about the case and how your organization became the plaintiff against the state of Connecticut.

Samuel: I think is important for your listeners to know that Connecticut is known as the Constitution State, but yet we are violating children’s constitutional rights like it didn’t exist.

Right now we are suing the state of Connecticut because in our public magnet schools we have racial quotas. That means we are turning children away from quality public schools because of the color of their skin, which is a constitutional violation, period.

Davis: Tell me about that. How has that been specifically happening? Because most people would say that’s ancient history.

Samuel: Thirty years ago it looks like … I’m from Meriden, Connecticut, and Hartford is our state capitol. It’s a majority urban community. Thirty years ago, a black mom said that the surrounding suburban towns were getting more resources, so they sued. Mind you, 30 years ago. They sued, the judge ruled in their favor and said that you need to provide equitable resources. Again, this is just for Hartford. The judge never told them to violate anyone’s constitutional rights. The judge never said, “Treat children differently.” It just said, “All deserve equal access to opportunity.”

So what does the great state of Connecticut do? They implement racial quotas. That means you have to have so many black and Hispanic children, so many white children, and so many Asian children.

Davis: Just to keep the percentages.

Samuel: Just to keep the percentages. When did the Constitution stop at the schoolhouse door? It doesn’t. In Hartford, black and Hispanic parents sued, and who is opposing us? The NAACP. The NAACP supports forced integration. … And I am an African-American mom. Imagine how distraught … Racial discrimination is being supported by an entity that was in place to protect the rights of all children.

So fast forward, we thought it was just a Hartford issue. The Connecticut Parents Union, we didn’t even know this was happening until we found out that these black and Hispanic parents were being attacked by their own communities. Unions were attacking them. Lawmakers weren’t speaking favorable.

So they called us and they let us know about Pacific Legal Foundation, which is a conservative lawyer foundation who took the case. People were attacking us. “You’re with conservatives?” This is about freedom for all, period. We’re not going to get stuck in all these ideologies and rhetoric that harm children.

Then when I met Pacific Legal, I told them who we were, the Connecticut Parents Union, and I told them we were concerned that the state doubled down on unconstitutional laws and applied this racial quota to the whole state.

First, it was just Hartford, and you’re going to apply racial quotas to the whole state. We’re not having it. So we reached out to Pacific Legal Foundation. We asked them, “Would they represent our organization to protect the rights of parents across the whole state?” And we just filed this year.

Last year, Robinson v. Wentzell filed in the Supreme Court, and the judge just ruled that the case can proceed, which is a huge victory. Now we’re just waiting to hear if our case moves forward because we had to prove that we had standing. I thought that was very interesting. Here are parents who have the right, the natural right, to the upbringing of their children, have to prove standing. How does that work?

Samuel: But anyway, we submitted the documents, and again, they’re doing this all pro bono and we’re just so grateful to Pacific Legal Foundation, who believe in liberty and justice for all, not some.

Davis: How did the state legislators respond to your getting involved in this?

As lawmakers, you take an oath to uphold the Constitution of the United States of America, and in that Constitution there are 14th Amendment protections. Children deserve to be treated fairly, regardless of their race. And yet, you chose to pass an unconstitutional law in a state that is known as the Constitution State.

How do all those oxymorons work? All this [is the] total opposite of everything in the Constitution and freedom stands for.

Davis: What about the teachers unions? How are they involved in this case?

Samuel: When I learned that they were part of the plaintiffs—we’re the plaintiffs, the defendants team—I went to their website before they took it down. I had to screenshot it.

Samuel: And I’m like, wait a minute. The teachers union’s fingerprints are all over this because they benefit from forced integration.

Samuel: Because they’ll say, “Oh, we need more money. Black children are just poor, they can’t learn, so we need more money to guarantee our jobs,” versus ensuring every school in the state of Connecticut is a quality school.

If you believe all children deserve to be justly educated, why would you have racial quotas that leave [out] the very children that these schools were designed for, in Hartford, Connecticut, one of those top five poorest districts in this country? Then why would you support something that discriminates against them? Unless you have an agenda?

Samuel: The agenda is forcing those kids out of the quality schools. They’re being indoctrinated, not encouraged to be free thinking, to be self-governing. Then you’re forcing those children that you won’t allow in these schools back into the unsafe, many of our traditional public schools.

Samuel: So they have a self-interest. It’s a guaranteed job because there’s money in failure. They’re failing over the things they are creating. Imagine that. The lawmakers who want the campaign donations, who don’t want the unions upset, cater to them at the expense of their constituents.

If you’re willing to sell your constituents to the highest bidder, you shouldn’t be in office, period. That’s why I take this Leadership Program of the Rockies Class so that we can inform and engage citizens. Don’t just pull the lever because you think they’re a nice guy.

Samuel: Will they uphold the freedoms that so many of our military and troops fought for throughout American history? We shouldn’t be compromising that sacrifice for a special interest, like a teachers union.

Davis: Well, it’s an amazing case and one that deserves national attention, frankly.

Samuel: That’s why we’re on your podcast. So we will start with that little bit.

Davis: That’s right. That’s exactly right. Well, Gwen Samuel, thanks for sharing about your case and for leading the charge and creating this Parents Union. Thanks for joining me here.

Samuel: Thanks for giving us a voice to be able to make this a national conversation, because we will be sharing your podcast everywhere we can. Thank you.