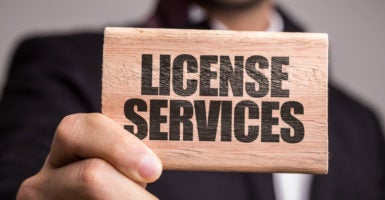 In most states, over one-fifth of the labor force reports having a license. (Photo: iStock Photos)

New data compiled by the Institute for Justice shows just how far states have overreached in regulating professions.

The report, “License to Work,” shows that 1 in 4 jobs are now restricted by licensing requirements, and that these onerous rules generally do nothing to improve service or protect people.

Licensing requirements began as a way to protect consumers. In 1885, for example, Massachusetts became the first state to issue a bar exam, reasoning that there was a strong public need to ensure lawyers were qualified.

In the past 50 years, though, incumbent professionals have exploited licensing requirements for anti-competitive purposes and have lobbied to have these requirements extended to cases that don’t warrant them.

One example is the American Society of Interior Designers. This cartel has spent over three decades lobbying state legislatures to institute licensure requirements. Three states and the District of Columbia gave in and adopted the regulation, while a number of others agreed to titling requirements, which restrict the job titles that “un-certified” interior designers can use.

There is no clear consumer protection concern with unlicensed interior designing, and most buyers would probably be able to determine quality without the regulation in place.

The licensure requirement, though, does impose expensive and time-consuming requirements for accreditation that prevent many talented new workers from entering the industry. As a result, the labor supply is smaller and members of the American Society of Interior Designers can charge more.

Another example are dentistry lobbyists. From 2005-2013, 30 states were successfully lobbied to shut down teeth whitening businesses, arguing that they should be restricted to only dentists, citing “health concerns.”

Teeth whitening businesses generally offer the same products that could be purchased over the counter, and practitioners rarely make physical contact with their patients. But the dentistry lobby successfully grabbed a line of business from its competitors.

The licensure arms race has created a demand for professional validation among previously unlicensed professions.

As occupational licensure becomes more and more widespread, more and more industries feel the need to lobby for it lest they be perceived as insignificant.

Excessive licensing has become an epidemic. In most states, over a fifth of the labor force reports having a license. States have restricted professions ranging from shampooers to florists to auctioneers.

Most licenses are not easy to obtain, either. A study of 102 of the most significant licensure requirements showed that the average cost to obtain them is $267 in fees, an exam, and a year of education and experience.

There is little correlation in cost and time to the risk of the occupation. Cosmetologist training, for example, takes over 12 times longer than training to be an Emergency Medical Technician. These absurd regulations exclude numerous qualified, talented entrepreneurs and jobseekers in a fundamentally unfair way.

In addition to raising the cost of numerous goods and services, excessive licensure can completely eliminate certain services from regions.

The Institute of Justice report informs us that when Louisiana imposed 500 costly hours of training to obtain a hair braiding license, it left only 32 braiders to legally serve the entire state of 4.7 million people.

In neighboring Mississippi, which imposed no requirement and let the market determine the labor supply, there were over 1,200 people braiding legally.

States should review their licensure laws and replace licenses that are unnecessary, or unnecessarily stringent, with weaker regulations. In particular, a restriction on work should meet four conditions:

Where those conditions are met, states should pursue the least intrusive method of professional regulation consistent with maintaining consumer protection. In all cases, laws should be subject to the burden of evidence.

Of the 102 requirements profiled by the Institute for Justice, only 23 were licensed in over 40 states. For most of these occupations, though, there was no difference in services between regulated and unregulated states, except in terms of cost and availability (unregulated states were better).

Among the industries with no discernable benefit are ones with supposed “health risks,” such as dental hygienists, nurse practitioners, and opticians. Near universally, though, these requirements raise costs and lower availability.

The evidence is clear. Where licensure laws are reformed and reined in—or eliminated altogether—small businesses and consumers alike are allowed to prosper and better live out the American dream.