Why VA Police Thought an Active Shooter Drill Was Real 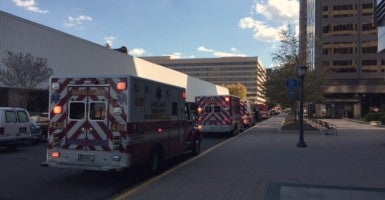 Police cars, fire trucks, and ambulances converged at my office complex. As I stood in awe with my colleagues, someone said “There’s an active shooter in the building over there!” In disbelief I searched Twitter for clues.

Report of active shooter on 5th floor of skyline complex on Rt.7 in Fairfax…in Deloitte Offices.

Jeez, this could be bad. As I scoured social media, more emergency responders arrived. A motorcade-worthy array of police motorcycles zoomed by and a half-dozen ambulances lined up along the street. This was getting serious. Soon the Fairfax County Police Department confirmed there was an active incident via Twitter:

We are investigating a report of shots heard at 5109 Leesburg Pike. Nothing confirmed. No suspect, no victims located at this point.

The police department followed up with a couple more tweets stating that they were continuing to investigate the situation.

Meanwhile, I was receiving tweets from individuals sheltering in place who were understandably very worried. One individual contacted me after seeing on of my tweets about the situation. She said: “SSA BUILDING AND GARAGE ON LOCK DOWN. NO ONE CAN LEAVE OR ENTER. WE ARE REAL NERVOUS.” I imagined that this person was hiding under her desk or in a closet, petrified. I copied the police department’s tweets and passed that info along.

And then this from the police department: “Information NOW CONFRIMED is that 5109 Leesburg Pk was the scene of an Active Shooter DRILL.” Having participated in numerous exercises, as both a federal homeland security official as well as a first responder, I knew that the police department must have been blindsided by this new information.

The response I had earlier witnessed was a real-world response, not a fictional one. Sure enough, the local news soon reported: “Fairfax Co. police not notified of drill, respond to reports of shots.”

Since an after action report should always follow an exercise, I will share three of my observations.