After Doing ‘More Than Anyone’ for Veterans, Trump Vows He’s Not Finished 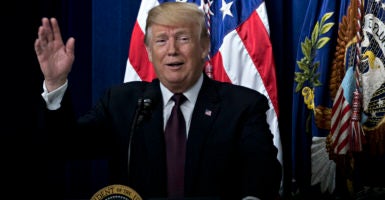 Toppling the bureaucratic stronghold at the Department of Veterans Affairs and expanding education opportunities and mental health treatment for former soldiers, sailors, and airmen are among the achievements President Donald Trump touted Thursday.

After visiting Marine barracks in Washington earlier in the day, the president returned to deliver remarks at the White House.

“We will cherish those who protect us and we will celebrate the amazing heroes who keep America safe and strong and proud and free,” Trump said. “To every veteran and military family across our land, I want to express the eternal gratitude and thanks of our entire nation.”

After talking about accomplishments for veterans, the president joked about walking away from the podium.

“The fact is, I’ve done a lot. Goodbye, everybody,” Trump said to laughter from the audience. “That’s a lot. That’s more than anybody has ever even thought about, and I’m proud of it, and we’re not finished yet.”

Trump referred to veteran suicides as a “tremendous, hard-to-believe problem.”

Trump also signed, earlier this year, the VA MISSION Act, which reforms the department’s existing programs to provide more care for veterans in the communities where they live, in order to minimize travel. This includes paying for veterans to get medical care outside VA facilities. It also established walk-in community clinics for veterans.

In 2017, he also signed the VA Accountability and Whistleblower Protection Act, which made it easier to fire corrupt or ineffective VA employees. It also increased protection for VA employees who reported wrongdoing.

The legislation was a response to the VA waiting list scandal in the Obama administration—where bureaucrats in clinics doctored lists and led to denial of care, but initially, no one was fired.

Since the law passed, more than 4,300 VA employees were removed, demoted, and suspended, according to the White House.

“By accountability, that ensures us that the right to get rid of—in a very nice way or a very rough way, anyway we want,” Trump jokingly said of the law.

“For the secretary, it’s probably a rough way, and that’s OK too, secretary. Those who mistreat our veterans are going to be held fully accountable. This is something for four decades they’ve been trying to get it approved. It sounds easy but it’s not. I love unions. We love the civil service. But they didn’t make this one easy for many, many decades. We got it done. We’re good at getting things done.”

Another law Trump signed was the Veterans Appeals Improvement and Modernization Act, which overhauled the VA’s appeals system for faster decisions. This legislation also helped put the VA on track to deliver a record number of decisions to veterans by the end of fiscal year 2018, according to the White House.

Robert Wilkie, the secretary of Veterans Affairs, introduced the president, noting that he served as acting secretary before he was confirmed by the Senate and was astonished as the strong interest Trump paid to serving veterans.

“It was an honor for me as the son of a soldier. It was an honor for me as an officer, and, in my time, in that 100 days I’ve been privileged to serve as the head this department, all of those things I saw about President Trump during my acting time have been made manifest in the support that he has given to our nation’s warriors,” Wilkie said. “He’s just returning from the Marine barracks. Veterans have never had a better friend in the White House.”

The Trump administration also took action outside of the VA for veterans.

The Forever GI Bill, which the president signed last year, increased education benefits to veterans, service members, and their family members. It also scrapped a 15-year limit on veterans’ access to educational benefits to ensure all veterans receive the benefits they have rightly earned.

The Department of Housing and Urban Development helped about 54,000 veterans find permanent housing and get access to supportive services last year.

Trump noted that veteran unemployment is at a 21-year low, but he hoped to get it lower.