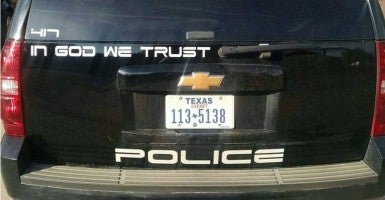 The phrase “In God We Trust” has sparked a debate over First Amendment rights in Texas, where an atheist group demanded that local authorities remove decals of the motto from patrol vehicles.

Texas news outlet KCBD reported that the Childress Police Department first received the demand in a letter written by the Freedom From Religion Foundation.

In response, Police Chief Adrian Garcia told the organization, in a written letter, to “go fly a kite.”

A picture of the decal on a patrol vehicle was shared to Facebook on September 2 and can be seen above.

“I think with all the assaults happening on officers across the country and the two that happened in the past few days in Harris County and Abilene, it’s time we get back to where we once were,” Chief Garcia told the Red River Sun. “This is our nation’s motto … it’s even on our currency. It’s nothing new.”

The decals were placed on the vehicles to reportedly express patriotism.

The Freedom From Religion Foundation, a group out of Wisconsin, has gone after agencies in Missouri, Louisiana, Texas, Florida, and other states that have sported “In God We Trust” decals on patrol vehicles, according to The Associated Press. The organization reportedly sent out additional letters in July and August to thirty sheriffs’ and police departments.

“Don’t confuse patriotism with piety. God is supposed to stay out of government,” Annie Laurie Gaylor, the group’s co-president, told The Associated Press.

“In a time when citizens nationwide are increasingly distrustful of police actions, it is frightening and politically dubious to announce to citizens that law enforcement officers rely on the judgment of a deity rather than on the judgment of the law,” she added in a statement. “After carefully reading your letter I must deny your request in the removal of our Nation’s motto from our patrol units, and ask that you and the Freedom From Religion Foundation go fly a kite,” he wrote, later posting a picture of his response to the Childress Police Department’s Facebook page.

“As police officers, we are sworn to serve and protect the people of our city,” The Washington Times reported that Chief Garcia said on Tuesday. “We were displaying the motto as a symbol of patriotism. Freedom From Religion Foundation is distracting thousands of officers around the nation from doing their job. We just want to be left alone so we can get back to serving our community.”