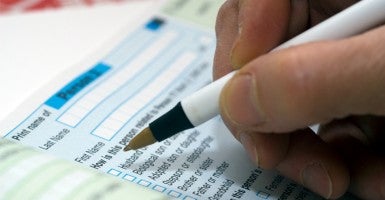 The Commerce Department Office of Inspector General examined 40 employees in the office—more than half of the entire staff at the time of the investigation—and found that all of them had reported hours never worked.

One employee misreported 1,277 hours, or 160 full work days, costing the government nearly $64,600 in unearned compensation. Another higher-paid employee billed taxpayers for 890 hours never worked, racking up about $85,170 on the government’s dime.

Many of the employees regularly began work late or left early yet claimed pay worth a full day. Others noted they were teleworking but did not actually perform any work at all despite collecting full pay.

John Thompson, the director of the Census Bureau, said in a statement he would pursue legal action to reimburse the money “stolen from taxpayers” for the falsified hours.

“Any employees who allegedly falsified timesheets and betrayed the trust of the American public will be held personally accountable to the fullest extent of the law, including possible termination,” Thompson said.

The investigation also revealed at least one employee who systematically abused his position to hire friends.

Among a slew of charges spanning nine pages of the report, he was “engaged in a sexual relationship” with a contractor he interviewed, hired, and supervised. The unnamed employee also spent more than a year attempting to clinch a job at the Census Bureau for his friend’s son.

Another employee was accused of conducting a background check on a Census Bureau applicant he had previously had a “sexual interaction” with.

After a whistleblower reported allegations of misconduct to the inspector general, a number of employees repeatedly attempted to impede the investigation through intimidation.

At an office party, one of the employees who had falsified timesheets held a knife in his hand to cut a cake, made a “stabbing motion,” and said, “This is for who went to the OIG.”

“In light of the widespread misconduct committed by CHEC employees identified in this Report, the apparent lack of internal controls on the quality of CHEC employees’ work and deliberate bypassing of the unit’s existing controls is disturbing,” the inspector general said.

Thompson said the Census Bureau has already begun to implement all of the recommendations in the report, including “rigorous” timekeeping procedures and mandatory training for the attendance system.