Refugee Crisis Has European Union Grappling With Its Destiny 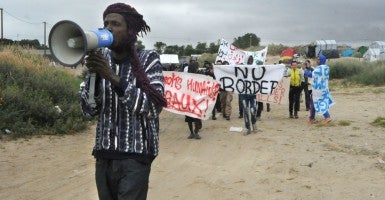 Approximately 2,500 to 3,500 refugees and asylum seekers are seen stranded in Calais, France, where they try to illegally enter Britain by jumping on trains, trucks, and other vehicles heading across the channel. (Photo: Teun Voeten/Sipa USA/Newscom)

As Europe has struggled to articulate a collective response to a flood of refugees from the Middle East and Africa, Germany has positioned itself as the continent’s good cop, coming to the rescue with a vow to take in 800,000 migrants.

With that pledge, German Chancellor Angela Merkel hoped to inspire the European Union’s 27 other member nations to come together and accept more migrants, allocating refugees among themselves.

“From Merkel’s point of view, this is a chance to make amends for Germany’s past,” said Nile Gardiner, a leading authority on transatlantic relations at The Heritage Foundation.

“Merkel views Germany as the leader of Europe, and as the dominant power, she feels that Germany must lead on this issue.”

But some Central and Eastern European countries have responded to such “dictates” with fierce resistance, underscoring the shakiness of a union coming off recent battles over the euro and Greece’s financial crisis.

The pushback forced Germany this weekend to transform its role to bad cop as it instituted new temporary controls along the German-Austrian border. If the commitment to take in 800,000 migrants was meant to bring skeptical countries inline to share the burden, that hope has failed for now.

On Monday, Austria, Slovakia, and the Netherlands introduced similar border controls, temporarily doing away with a European convention that promises passport-free travel between member nations.

“Merkel’s generous offer has prompted a great deal of nervousness,” Gardiner said in an interview with The Daily Signal.

“You are seeing a sea change in Europe—a rethinking of a deeply held belief of open borders.”

>>>Crisis Pressures US to Provide Haven For More Syrian Refugees

In an emergency meeting of the European Union on Monday, ministers did not explicitly endorse a plan offered last week by Jean-Claude Juncker, president of the European Commission, ordering mandatory quotas for member nations to facilitate the resettlement of 120,000 refugees. According to The New York Times, interior ministers from across Europe agreed to take in this number but could not decide on how the refugees would be divided up.

The Times said that ministers did agree to share 40,000 migrants currently being sheltered in Greece and Italy, but only to distribute them voluntarily.

The fractured response has exposed divisions within the European Union that have grown since its founding in 1993.

Experts say the lack of European consensus has been amplified by a brew of related concerns among members, including uneven recovery from the economic crisis, a rise of far-right political movements that have drummed up nationalism, and resistance to religious and racial diversity that have countries searching for an identity.

“How does Europe respond to a crisis of people coming from different backgrounds?” said Sebastian Mallaby, a senior fellow for international economics at the Council on Foreign Relations.

Mallaby, speaking on a conference call with reporters Monday, continued: “Migration has created a lot of conflict in Europe. Assimilation of non-Europeans has been less successful than it has been with the U.S.”

Stewart M. Patrick, Mallaby’s colleague and the director of the Council’s International and Global Governance Program, added: “You are dealing with countries that have very little experience in handling migration, especially outside Europe.”

Poland, for example, is 98 percent white and 94 percent Catholic.

Resistant countries such as Poland, Hungary, the Czech Republic, and Slovakia face challenges at home that make them reluctant to help others.

The economic recovery is inconsistent across Europe. Official unemployment rates range from 4.7 percent in Germany to 25.6 percent in Greece.

But few migrants want to make a home in Eastern Europe, preferring Western countries with more generous welfare systems such as Germany and Sweden.

“They are moving to where they are likely to be accepted and where they feel they will be taken care of the best,” Gardiner said.

“But undoubtedly, the influx of refugees will place a big burden on European welfare states. Europe is barely able to sustain its current welfare states. It is unsustainable with aging populations and huge, unfunded pension liabilities across Europe.”

Others argue that the fears of welfare abuse are misguided.

“One of the fascinating things about this crisis is that many of the refugees have smart phones, which is an indication that they have access to technology and relatives in these countries,” Patrick said.

“This suggests they are freed to not be wards of the state as dramatically as opponents are imagining.”

These experts say Germany is smart in its motivation to welcome migrants. Though it is undoubtedly acting in good faith, observers claim that Germany is eager to replenish an older population with willing workers.

“The literature consensus is that this is a good thing for economic growth,” Mallaby said. “It’s an excellent thing to have inward immigration. Particularly in Europe, where you have an older population that needs young workers to pay taxes and fund retirees.”

The experts say Europe’s choices on how to handle the refugee crisis could define its future.

“There are 7 million internally displaced Syrians,” Mallaby said. “So you can expect the flood of humanity is not going away. It’s early to call the outcome. Maybe they realize if they don’t respond to the challenge, the alternative is total mayhem.”

Though time remains for the response to change, Gardiner insists he has seen enough to speculate on the European Union’s destiny.

“The days when Germany can dictate what happens in the EU [are] long gone,” Gardiner said. “This crisis will exacerbate the breakup of the EU.”