Crisis Pressures US to Provide Haven For More Syrian Refugees 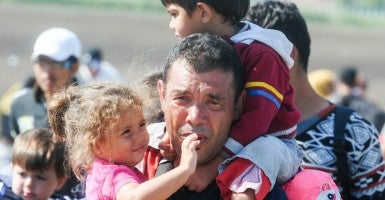 As the world grapples with a migrant crisis flooding Europe, the United States is facing pressure to provide safe haven for Syrians fleeing their government and terrorists.

Four million Syrian refugees—nearly a fifth of the population—have fled the country since the civil war began there four years ago, but only about 1,500 of them have resettled into the U.S. during that time.

Refugee and immigrant rights groups have long called for the White House to admit more refugees, but global outrage over images of a drowned Syrian toddler in Turkey last week might spur the U.S. to action.

“The general message sent out by this administration and others has been, ‘This is not our war and not our responsibility,’” said Kevin Appleby, director of migration policy at the U.S. Conference of Catholic Bishops.

“They probably feel they have more cover now. It’s a critical moment. It’s an unprecedented crisis and the U.S. needs to step up and do its part.”

Though people from both sides of the political divide have expressed a moral willingness to help, some have argued that the U.S. needs to be especially diligent in handling refugees from Syria, where the government bombs its own people and numerous terrorist groups fight for territory.

“We sympathize with the refugees—the vast majority of whom are unfortunate people caught in the middle of a horrible civil war, persecution and disaster,” said Steve Bucci, a foreign and national security expert at The Heritage Foundation. “But America’s leaders have a responsibility first to the American people and protecting them and ensuring their security is maintained. Within that responsibility, we should help as much as we can as quickly as we can without compromising the security of America.”

Over the last few days, the White House has said it is considering options over whether to increase the country’s capacity to resettle Syrian refugees. The U.S. has provided more than $4 billion in humanitarian assistance since the Syrian crisis began—the most of any country—and more than $1 billion in assistance this year.

“The international community is looking at the United States right now to determine what additional steps we can take to try to confront, or help Europe confront, this difficult challenge,” said Josh Earnest, the White House press secretary. “We’re certainly mindful of the urgency around increasing the resources and response.”

The United States currently limits the number of migrants from Syria to 1,500 per year.

Since the war began, the United Nations has referred about 15,000 Syrians to be accepted by the U.S.

Every year, the president, in consultation with Congress, sets a ceiling for how many refugees the U.S. will take in from throughout the world—prescribing a certain amount for each region of the world. For this fiscal year, and the last few before it, the U.S. has set the cap at 70,000.

Religious and refugee groups tell The Daily Signal they are urging the U.S. to take in 200,000 total refugees next fiscal year, which begins October 1, including 100,000 Syrians.

If the White House were to add to its capacity, Congress would have to approve additional funding for the State Department and the federal Office of Resettlement.

To qualify as a refugee, a person must have been persecuted or have fear of being persecuted for his or her race, religion, nationality, or social and political affiliations.

A refugee differs from a person seeking asylum in that refugees have already fled their country, but the same standards apply. Migrants can also apply for a lesser state, called temporary protected status, which does not require persecution or a fear of it. The U.N. High Commissioner for Refugees is responsible for selecting refugees deemed eligible for resettlement.

From there, the State Department, and then the Department of Homeland Security, vet the applicants overseas before allowing them to board a plan to the U.S.

Refugees groups say the process from the time the U.N. refers a refugee for resettlement to when the person arrives in the U.S. can take up to 1,000 days.

Appleby says the process for Syrians has been slowed further because of the security concerns.

A refugee can be excluded from consideration for showing any kind of support to the various rebel groups fighting the Syrian government, Appleby said.

“These are not the most destitute people,” concludes Appleby, who says the poorest migrants are mostly stuck in refugee camps in places closer to Syria, like Turkey. “Many are affluent people who may have family ties here. They have been through a lot and just want the opportunity to work and not live in fear.”