5 Things John Kerry Got Wrong on the Iran Deal 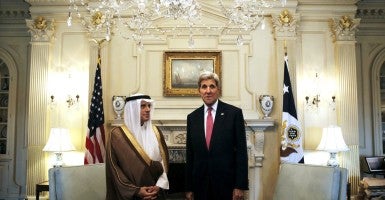 Wednesday, a 34th Senator came out in favor of the flawed Iran Deal, which means the Senate will not veto President Obama’s agreement.

A majority of Americans however – including the country’s top military brass and national security experts and practitioners – oppose the deal.

The administration’s pro-deal arguments have been generally misleading and insufficient to justify the major concessions the United States has had to make to Iran.

The Obama administration has allowed the creation of a diluted verification regime without putting pressure on Iran’s abysmal human rights record, and has allowed for U.N. sanctions to be dismantled. In lieu of Iran’s support for terrorism against the United States, this is highly troubling.

In fact, the United States has given in to many of Iran’s demands without getting much, if anything in return.

Secretary of State John Kerry gave a talk defending the Iran Deal’s merits. His statements however are contrary to the reality. Here’s why:

The agreement does not, and cannot ensure that Iran will not get a nuclear weapon because it does not fundamentally alter Iran’s perceptions of its national security interests. If Iran views obtaining nuclear weapons in its best national interest, then the deal will not stop them from doing so.

Iran has developed its nuclear program in defiance of its international obligations, conducted nuclear weapon activities in the past, and lied about these activities to the International Atomic Energy Agency (IAEA), the agency responsible for verifying the deal. There is little to stop this from happening again.

Tehran will continue to cheat in the future, severely limiting the United States and the IAEA’s ability to assess a true state of its nuclear program.

Quite to the contrary, major restrictions on Iran’s nuclear program expire after 5, 10, 15, and 25 years. After about 15 years, if not sooner, Iran will be in as good of a position with respect to its nuclear program as it is today.

Iran will actually be better off geopolitically than it is today, due to billions of dollars it will receive from lifted sanctions – some of which will fund Iran’s terrorist activities.

The United States and allies will be on the receiving end of these activities for there has certainly not been an abandonment of anti-American rhetoric in Tehran as “Death to America” continues to be chanted and perpetuated by Iranian leadership.

Kerry maintains that sanctions were not slowing down Iran’s nuclear program. This is simply not true, according to the administration’s own accounts.

Sanctions were of course slowing Iran’s economy down – including its nuclear program.

Outrageously, the Iran deal’s sanctions relief will provide Iran with billions of dollars that will inevitably continue to fund its terrorist activities against the United States and its allies.

Additionally, the deal relieves sanctions on Iranians directly responsible for American deaths, all the while U.S. hostages in Iran continue to be a subject of torture and poor treatment.

The deal is likely not effectively verifiable.

Kerry admitted in the past that he did not read verification documents negotiated between Iran and the IAEA, nor has the administration submitted critical documents related to verification to Congress and the American public for a review, preventing oversight and an informed discussion.

What we know does not inspire much confidence in the administration’s ability to get the Iranians to agree to a meaningful effective verification regime.

For example, it allows Iran to collect its own samples at a Parchin site where Iran conducted nuclear weapon activities in the past.

This is akin to letting a fox guard the chicken coop. Iran already declared that it will not allow the IAEA access to its military facilities and nuclear scientists.

A mark of a good leader is that he seeks to leave his country better of for decades, not just for the duration of his term in office.

The Iran Deal will not make America better off in the long run as its critical provisions will expire after few years.

Through the deal Iran will be permitted to maintain a robust research and development program and over 5000 centrifuges of the same generation that North Korea used to build enough nuclear material for its nuclear weapon. If the United States can learn anything from the failed deal with North Korea, which was able to build a nuclear weapon after promising to not do so, it is to not trust a country that has lied in the past.

The truth of the matter is that the deal is flawed. The United States gave into too many of Iran’s demands (why most people oppose the deal).

A better alternative involves continuing the sanctions regime, strengthening U.S. military capabilities in the Middle East, and replacing the flawed agreement at the first opportunity.