4 Misleading Claims Obama Made About Iran Deal In New Remarks 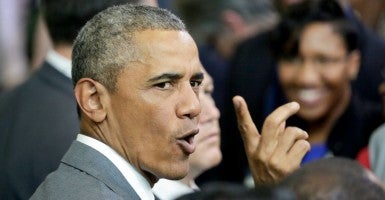 President Obama addressed the nation in a continued effort to reverse Americans’ declining support for the Iran deal.

In the past few days alone, more than 900 rabbis have voiced their opposition to the deal.

The administration wouldn’t be having such a hard time achieving consensus if it had done a better job negotiating. A majority of Americans, and even Israelis, favor a diplomatic solution to the problem.

Nevertheless, the president has continued to try to sell the bad deal.

Here are some of the Obama’s most misleading claims.

This statement is untrue. A piece of paper cannot stop a determined country from obtaining a nuclear weapon. The cash-strapped regime in North Korea is a great example.

To make matters worse, the deal does not dismantle Iran’s uranium enrichment infrastructure, which was developed in defiance of Iran’s international obligations.

The deal effectively rewards years of Iran’s violations of its international obligations with billions of dollars to fund terrorism and lifts sanctions on advanced technologies and materials usable in Iran’s nuclear program, including Tehran’s ballistic missile program.

The deal even opens a path for Iran to buy functioning parts of a nuclear weapon.

Usually, a handful does not mean thousands, as is the case with the number of Iranian centrifuges the deal leaves untouched.

Additionally, the deal allows Iran to continue research and development of more advanced types of centrifuges, including letting Iran operate them by hundreds.

None of the centrifuges will be destroyed. And they are only a part of the problem. Maintaining skilled people who know how to manage the centrifuges is just as serious.

Should Iran decide that the deal is no longer in its interest, it will be in an excellent position to restore its capabilities fast.

The United States will not be able to impose a sanctions regime that would be as rigorous as the existing regime, which is a result of years of labor and hundreds of trips of U.S. officials to foreign banks.

Once cash starts flowing, it will be immensely difficult to re-impose these sanctions. Sanctions relief is front-loaded, further reducing Iran’s incentive to not follow through with all its obligations.

How will members of Congress know if Iran is cheating, let alone the American people, since the administration has failed to provide documents outlining details of verification?

Just last week, it became clear that Iran will be allowed to use its own inspectors to investigate sites suspected of conducting nuclear weapon work.

This is akin to letting a fox guard a chicken coop. The verification regime is particularly weak when it comes to undeclared/covert activities and activities that do not involve radioactive material.

Iran can hold up inspectors for months and will be provided information about where covert activities are occurring, making it easier to cover them.

Iran has been lying, cheating, and covering up its nuclear activities for years.

Americans and the International Atomic Energy Agency, responsible for deal’s verification, have been surprised more than once in the past regarding Iran’s illicit nuclear activities.

Obama will be putting future American presidents in a tough position.

This is because Iran will be able to spend billions of dollars on terrorist activities—and the United States and allies will be on the receiving end of these activities.

Tehran will be able to obtain advanced weaponry from Russia and China, certainly complicating U.S. options should Iran decide to cheat.