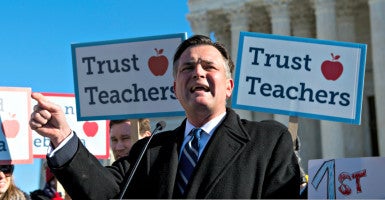 Rep. Luke Messer, R-Ind., here at a rally outside the Supreme Court in January 2016, is the author of a bill to undo the Obama administration's dictation of bathroom policy for public schools. (Photo By Bill Clark/CQ Roll Call/Newscom)

The Republican mobilization against the White House’s transgender bathroom directive has started. A bill introduced by Rep. Luke Messer, R-Ind., would block the Obama administration’s guidance pushing public schools to allow students to use the restrooms of their choice.

The bill, Messer told The Daily Signal, would return control of the issue to the state and municipal level while also prohibiting the administration from cutting off taxpayer funds to public schools that disregard the directive.

Although Messer is a junior member of Indiana’s GOP delegation to the House, he is the fifth-ranking Republican in House leadership as chairman of the Republican Policy Committee.  His bill, introduced Wednesday, represents the highest profile and only legislative rebuke of the administration on the transgender policy issue to date.

“I think parents across America are looking for a congressional response,” Messer said, “and so far our response hasn’t been strong enough.”

Earlier in the week, 73 House Republicans, including Messer, wrote an open letter to the administration demanding answers.

The guidelines, announced May 13 by the departments of Justice and Education, instruct local public schools to extend Title IX protections, which prohibit sex-based discrimination, to transgender students.

And though the directive doesn’t carry the force of law, it contains an implicit threat: Comply or lose federal funding.

That’s “the modus operandi of this administration,” Messer, 47, said, adding that the directive “will change the equation for schools across the country.”

As a standalone piece of legislation, Messer’s bill faces an uphill battle out of the House, and another obstacle in a veto by President Barack Obama.

But, the Indiana Republican told The Daily Signal, he plans to attach the bill to a piece of must-pass legislation such as an appropriations package.

In a Wednesday interview with Buzzfeed, Obama described his directive as “part of our obligation as a society to make sure everybody is treated fairly and our kids are all loved and protected.”

Messer, first elected in 2012, criticized that premise as unfounded, arguing that Obama was overstepping his own bounds.

“I think it’s ironic that the president says he brought forward this regulation to combat bullying,” Messer said, “when the truth is that this action is the administration bullying local schools.”