Why Reagan Would Have Opposed Iran Deal 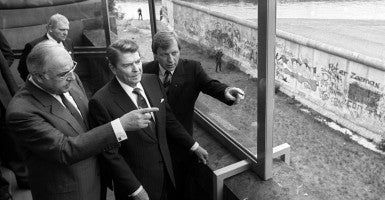 Proponents of President Obama’s Iran deal have invoked analogies to President Reagan’s arms control approach in effort to increase desirability for the unpopular agreement in the eyes of Congress and the general public.

The analogy is misguided and flawed (just like the Iran deal itself).

For starters, Obama is no Reagan.

The “great communicator” was willing to stop negotiations when the opposing party demanded excessive concessions that would compromise American security.

Contrast this with Obama. For the Iran deal, the Obama administration has buckled on:

The United States is left with an agreement that legitimizes years of Iran’s nuclear weapon activities, undermines U.S. nonproliferation goals, and provides Iran with billions of dollars to continue to conduct terrorist activities around the world.

Undoubtedly, the United States and its allies will be on the receiving end of these activities more than any other party to the deal.

Reagan realized that strong defense, coupled with U.S. engagement around the world, is a necessary precondition for other U.S. policies to succeed.

Without security, there is no government legitimacy. First and foremost, providing for the common defense is a moral obligation as much as a pragmatic one.

The Obama administration gutted advanced missile defense programs, like the Multiple Kill Vehicle and the Airborne Laser, in its first year in office.

Obama canceled U.S. missile defense plans in Poland and the Czech Republic on the anniversary of the Russian invasion of Poland. He announced a new plan that was subsequently scaled down, emboldening the Russians to threaten Europe and pocketing the concession and giving up nothing in return.

Reagan would certainly be disappointed in Obama’s approach.

The administration has been trying to convince the American public and Congress that the alternative to the Iran deal is war. The United States has a better alternative than this at its disposal.

The United States can keep sanctions in place and make them more stringent. Sanctions brought Iran to the negotiating table before, and they would do that again. Simultaneously, the United States must improve relations with its allies in the Middle East and Europe.

Obama’s legacy has created adversaries who no longer worry about U.S. policies, along with allies left wanting U.S. leadership and credibility.

The United States must improve its military capabilities—what Reagan would have called peace through strength.

Reagan left the United States in a much better geopolitical position to his successors than when he began his presidency.

By providing Iran with resources to conduct terrorist activities and a massive infrastructure to continue on a path toward a nuclear weapon, Obama is doing the exact opposite: leaving the United States worse off for his successors.