Licensing Laws Have Long Been a Drain on the Economy. But Florida Could Soon See Reform. 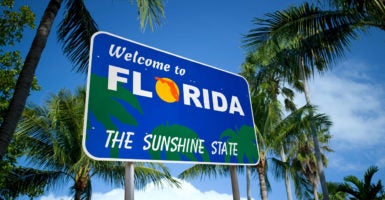 Industry opposition succeeded in blocking a 2011 attempt at licensing reform, but now the Florida House of Representatives has passed a similar measure. (Photo: iStock Photos)

Florida lawmakers are finally addressing the elephant in the barbershop: Floridians must endure 1,200 training hours, pass an exam, and pay a $223.50 fee just to cut hair for money.

In the first weeks of Florida’s 60-day legislative session, the state House passed a bill, H.B. 15, to loosen the chokehold that several licensing regulations now have on the state’s economy.

Justin Pearson, a lawyer with the Institute for Justice, said that “[o]ccupational licensing is one of the biggest barriers stopping Floridians from finding work.”

Del Castillo used to live in California, where she worked as a certified CrossFit trainer and health coach. In 2014, she created her own nutrition consulting business, Constitution Nutrition. Naturally, she sought to continue her new business when she moved to Florida with her husband, an Air Force officer.

California required no special license for giving nutritional advice. But thanks to Florida’s dietitian licensing scheme, a practicing nutrition counselor was able to shut down Del Castillo’s business merely by complaining about her to the Health Department. She was soon facing more than $750 in fines and the possibility of jail time.

A 2017 report by the Wisconsin Institute for Law & Liberty titled “Land of the Free?” confirms what most people instinctively understand—namely, that states that wrap the most red tape around jobs strangle their economies.

It found the few states with the heaviest regulatory burdens, including Florida, were stifling job creation. Collin Roth, a research fellow at the Wisconsin Institute, wrote that “23 states could see employment growth of between 5 percent and 9 percent across the 10 professions if they simply reduced their licensure regulations to those of the least burdensome state—Hawaii.”

Stephen Slivinski, a senior research fellow at Arizona State University, told Watchdog.org that the main factor driving excessive occupational licensing rules is “how much lobbying clout incumbent businesses have in the state legislature,” where they obtain, and fight to maintain, regulations that “keep out competition.”

Still, Slivinski cautions against blaming any one political party.

Florida representatives’ recent 74-28 vote to cut red tape in licensed professions within the state is, the Institute for Justice’s Pearson said, “a welcome first step to paring back many arbitrary, onerous, and just downright pointless regulations that infringe on the right to earn an honest living.”

The bill includes a repeal of licensing requirements on professions that are so odd—such as timekeeping at a boxing match—that one wonders why lawmakers bothered to hamstring new practitioners in the first place.

“What H.B. 15 would do if it were to pass the Senate and be signed into law would be to create thousands of new jobs in Florida overnight,” Pearson said.

But the bill faces familiar opposition.

“Deregulation is a public disservice,” a Gainesville, Florida, salon owner told reporters. “Could people just open their doors and go to work? Yes, but what’s the quality the public could expect from those new businesses that are opening?”

What about the quality assessments that are communicated among family, friends, and neighbors, and through reviews on Yelp, TripAdvisor, Foursquare, Angie’s List, and other user review services? And what about health and safety regulations that apply to existing businesses?

As the Wisconsin Institute and others have shown, despite the increase in online user review services that allow customers to describe the quality of a business, and relevant health and safety regulations, anti-competitive licensing schemes persist in Florida and across the country.

Economists have estimated that nationwide, “licensing results in 2.8 million fewer jobs, with an annual cost to consumers of $203 billion.”

Bills have been introduced in the House and Senate that would encourage states to reform those laws.

State legislators across the country should seize the momentum coming from the Trump administration, Congress, and a few states such as Florida that are working to improve their economy, and should reduce occupational licensing restrictions in their states.