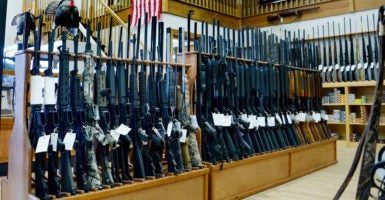 Rifles on display in 2016 in a hunting and weapons store in Staunton, Virginia. (Photo: Olivier Douliery/Sipa USA/Newscom)

Days after President Donald Trump touted possible federal legislation raising the age for purchasing guns to 21, two major retailers were sued for doing so on their own.

A 20-year-old man in Oregon sued Walmart and the Dick’s Sporting Goods chain for age discrimination after the two retailers decided to prevent anyone under 21 from buying a rifle.

An 18-year-old in Michigan also sued Dick’s for age discrimination.

Now the Florida Legislature, responding to the Feb. 14 school shooting in Broward County, has passed a major bill to increase the legal age to buy a rifle from 18 to 21.

The bill also bans bump stocks, which increase the firing capacity of certain guns, and authorizes some teachers to carry guns on school grounds.

Florida Gov. Rick Scott, a Republican, has said he supports the bill, which the House passed 67-50 on Wednesday and sent to him to sign. The Senate approved the measure on Monday by a vote of 20-18.

>>> Update: Scott signed the bill into law Friday, prompting the National Rifle Association to file a federal lawsuit to block some of it, the Sun Sentinel newspaper reported.

It is already illegal by federal law for anyone under 21 to buy a handgun.

If the age restriction occurred at the federal or state level, that’s a limit to constitutional rights, said Jennifer Baker, an NRA spokeswoman.

“Federal law prohibits adults under the age of 21 from purchasing a handgun from a licensed firearm dealer,” Baker said. “Legislative proposals that prevent law-abiding adults aged 18 [to] 20 years old from acquiring rifles and shotguns effectively prohibits them for purchasing any firearm, thus depriving them of their constitutional right to self-protection.”

Trump met last week with a bipartisan group of members of Congress to discuss ways to respond to the Feb. 14 massacre in which a 19-year-old man used an AR-15-style rifle to kill 17 and wound 17 others at his former school in Parkland, Florida.

Trump, whose Thursday schedule included a discussion of the effects of violent video games on young people, addressed the existing disparity in age during last week’s White House meeting, saying:

You can’t buy a handgun, you have to wait until you’re 21. But you can buy the kind of weapon used in the school shooting at 18. I think it’s something you have to think about. I’ll tell you what, I’m going to give it a lot of consideration, and I’m the one bringing it up.

Keeping guns out of the hands of those who will cause harm and defending individual rights “are not mutually exclusive,” the NRA’s Baker said.

“Passing a law that makes it illegal for a 20-year-old to purchase a shotgun for hunting or an adult single mother from purchasing the most effective self-defense rifle on the market punishes law-abiding citizens for the evil acts of criminals,” she said.

The matter would be open for litigation, said Michael Hammond, legislative counsel for the group Gun Owners of America.

“The left pretends as though 21 would be a uniform age, prohibiting a 14-year-old from ever handling a semi-automatic weapon,” Hammond told The Daily Signal. “That’s not the case. The day after such a law passes, they would come back and point out that younger people can still buy at gun shows and [on] the internet and demand universal background checks.”

The restriction would be for sales from a federally licensed dealer and not a ban on gun ownership for adults age 18 through 20, Hammond noted. So, he said, the government could argue that raising the age to purchase rifles isn’t an outright ban.

“The government has made a distinction between a right and the ability to regulate commerce and sales,” Hammond said. “If the government tried to say someone under 21 couldn’t have a gun, period, it would raise real constitutional concerns.”