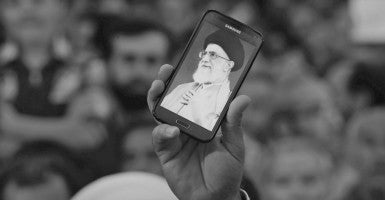 An Iranian man holds his mobile phone showing a picture of Iranian supreme leader Ayatollah Ali Khamenei as he along with others attends the ceremonies on the occasion of the 26th death anniversary of Ayatollah Ruhollah Khomeini (Photo: ABEDIN TAHERKENAREH/EPA/Newscom)

In the latest spin on the Iran deal’s flawed verification provisions, proponents of the deal are twisting words like pretzels to convince the American public that a nuclear program cannot be hidden in 24 days.

Within the current deal, Iran will have 24 days to prepare for the International Atomic Energy Agency (IAEA) inspections.

But many things have to happen before the 24 days clock starts ticking.

Iran can hide elements of its nuclear program despite best radiation detection equipment.

Despite the recent Reuters headline proclaiming, “Why it’s impossible to hide nuclear work in 24 days – or 24 years,” the assertion that Iran can’t hide nuclear weapon work with the 24 day time period is wrong (despite impressive technological advances in the field of radiation detection).

The discussion about the 24 days highlights how the Iran deal is plagued by ambiguities regarding verification and monitoring. This presents a problem with respect to making judgments as to whether the deal is effectively verifiable and whether the International Atomic Energy Agency will be able to find out about Iran’s cheating.

The latter is a particularly salient issue given decades of Iran’s deception and lying about the nature and scale of its nuclear program.

To add insult to injury, agreements between the IAEA and Iran are not available to Congress or the American public, even though Iran’s parliament has access to them. The administration did not release the unclassified part of its assessment of Iran deal’s verifiability, further obstructing an informed public discussion.

1. Can Americans have a complete confidence in the verifiability of the Iran deal?

Of course not—because they actually don’t know what is the agreement between the IAEA and Iran.

Secretary of State John Kerry and Secretary of Energy Ernest Moniz said as much during their testimonies.

The assertion that 24 days presents a maximum period between a notification of an undeclared activity to Iran and an inspection is wrong. In fact, Iran may have more than 24 days to hide nuclear activity: the terms of the Iran deal “permit Iran to hold inspectors at bay for months, likely three or more,” wrote Hillel Fradkin and Lewis Libby in the Wall Street Journal.

The IAEA has always tried to clarify problematic activities with host countries before proceeding to a more intrusive inspection.

The agreement does not clarify how long Iran has to respond.

In the past, the IAEA has experienced delays resulting from Iran refusing to provide accurate information about its program or providing flawed information to the IAEA, which then takes time verifying.

Iran will be informed about particular activities that the IAEA is concerned about, making it easier for Iran to hide them.

Additional complications stem from protecting U.S. intelligence sources, potentially making it more difficult to convince countries like China and Russia that an inspection is, indeed, warranted.

2. What can really be detected?

Despite a Reutersarticle’s assertion that “one-billionth of a gram, of leftover dust from nuclear-weapons related work — such as covert enrichment at a suspect site — could be detectable,” the truth is more complicated.

Verification provisions related to nuclear weapon activities that do not involve radioactive material are just as important, yet the agreement is weaker on verifying this type of activities.

They are relatively easier to conceal and do not leave radioactive traces that sensitive equipment could pick up.

3. Will Iran have time to hide illicit activities?

In a nutshell, yes, based on the history of countries hiding illicit activities.

In 2007, Syria took only a month to clean up its undeclared nuclear reactor site after the Israeli strike, although the IAEA found radioactive samples when it was allowed to access the site in June 2008.

The IAEA might trace a presence of radioactive materials, but sanitization and deception make it infinitely harder to proof what was their original purpose and whether activities associated with them were of military nature.

Then there is a question of enforcement.

The IAEA access is guided by complicated agreements and willingness of a host country to provide it.

Despite conclusive proof of Syrian illicit activity over the next several years, Syria has gone largely unpunished for deceiving other countries.

The idea that the IAEA will be able to quickly and conclusively prove the nature of Iran’s potential suspicious activities betrays a lack of fundamental understanding and appreciation for how the IAEA works.

Further, Iran is unlikely to cheat in its large nuclear-related facilities the IAEA and others know about. Instead, Tehran will cheat in smaller facilities that are easier to sanitize. It has a history of doing so!

Iran sanitized and reconstructed a part of the Kalaye electric company where it carried out undeclared uranium enrichment work.

Iran denied the IAEA access to the site for months. Eventually, the IAEA was able to find enriched uranium traces but the process, complicated by Iran’s activities and refusal to cooperate, took years.

Some might argue that the United States would not have to wait all this time to conclusively prove Iran’s activities are illegal and impose the so called snap back provisions.

The idea of a snap-back is pure illusion, lacking any grounding in realities of international cooperation.

It will be immensely difficult to put the current sanctions regime back in place, even if the IAEA produces a beyond-the-doubt proof that Iran’s activities are of military nature because U.S. relationship with other countries like Russia and China is more hostile than it was when sanctions were imposed.

The sanctions regime was a result of hundreds of trips of U.S. officials to foreign banks and countries, convincing each actor it is better to trade with the United States than with Iran.

Such a magnanimous effort takes time.

Time is precious, especially since sanctions don’t apply retroactively and wouldn’t cover deals Iran negotiates between their lifting and their potential re-imposition.

5. Why is Obama backing a bad deal?

The administration is holding on to the deal despite Iran’s declarations it intends to violate its arms and missile provisions.

As if to dispel any doubts about difficulties related to enforcing the deal, the administration has so far failed to react to Qasem Suleimani’s recent travel to Moscow.

Suleimani, who is responsible for hundreds of U.S. deaths, is subject to the United Nations travel ban.

In the long run, the United States and its allies are better off without the deal than with it.

The more Americans learn about the deal, the cleared the fact becomes.