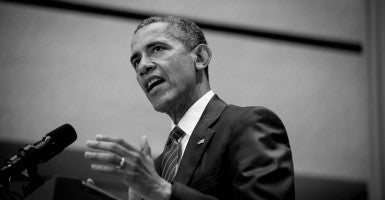 Under the terms of the recently finalized nuclear deal (Joint Comprehensive Plan of Action), Iran will now have less oversight and restrictions on its nuclear program than the White House will admit.

The Obama administration, striving to convince lawmakers and the American people that Iran will be punished if it violates the new deal, has been silent as to what it actually plans on doing with respect to Iranian violations.

Iran, which has a long history of violating its international obligations, is clearly taking advantage of the Obama administration’s naiveté regarding its deception through this deal.

For instance, Iran has begun sanitizing its infamous Parchin site, where it conducted nuclear weapon activities.

This means Iran is removing any traces of illicit activity, as it has done in the past, thus making inspection activities even more challenging.

Recent intelligence reports indicate that Iran is seeking to remove any traces of illegal activity:

Intelligence officials and lawmakers who have seen the new evidence, which is still classified, told us that satellite imagery picked up by U.S. government assets in mid- and late July showed that Iran had moved bulldozers and other heavy machinery to the Parchin site and that the U.S. intelligence community concluded with high confidence that the Iranian government was working to clean up the site ahead of planned inspections by the IAEA.

This deceit is highly troubling to many in the international community, but it is not surprising.

Iran’s uranium enrichment program was first developed in defiance of the International Atomic Energy Agency (IAEA), an agency responsible for monitoring that no nuclear material is being diverted to military use.

In 2003, Iran signed what is known as the “Additional Protocol,” giving the IAEA better tools to monitor its nuclear activities.

Tehran agreed to provisionally implement it, pending ratification, but did so for only three years, frustrating IAEA’s efforts to clarify Iran’s weapons activities and highly enriched uranium diversion.

Under the terms of the Joint Comprehensive Plan of Action, Iran has agreed to provisional application again, but not to officially ratify the Additional Protocol.

Rather, Iran only has to “seek … ratification of the Additional Protocol” (emphasis added) within eight years.

The concession will have serious implications for IAEA’s ability to verify Iran’s nuclear program.

But problems with verification only begin there.

Former Assistant Director of the Arms Control and Disarmament Agency Manfred Eimer and former Assistant Secretary of State for Verification and Compliance Paula DeSutter pointed out the problems with this approach:

Under the JCPOA, should Iran again cease its provisional application of the AP, the IAEA’s authority and ability to inspect undeclared sites will be severely reduced … if the IAEA and Iran are unable to agree to arrangements, there could be a 24-day lag between the request and IAEA access, providing ample time for Iran to sanitize the site, particularly because the IAEA would have informed Iran and a joint commission of the basis of its concerns.

The Iranians have repeatedly shown their lack of trustworthiness, and the recent deal enables them to continue their international nuclear misbehavior.

In addition to its nuclear violations, Qasem Soleiman, Iran’s Quds Force commander, who has been linked to deaths of American soldiers in Iraq, recently traveled to Moscow despite being prohibited to do so by United Nations sanctions, showing Iran as a recent sponsor of terror.

Fortunately, the United States and allies do not have to accept the flawed Iran deal.

They can continue and strengthen the sanctions regime, thus improving the United States’ negotiation position over time.