A Coup Against the Constitution 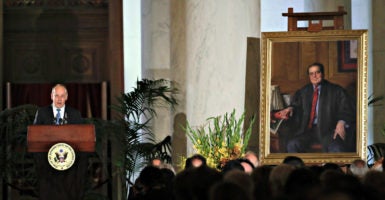 Lawyer Paul Clement speaks during a U.S. Supreme Court Bar Memorial Nov. 4 in honor of the late Justice Antonin Scalia, seen in the portrait at right, in the Great Hall of the Supreme Court. (Photo: Carolyn Kaster/Pool /Reuters/Newscom)

A New York Times editorial Monday on the Senate’s role in the confirmation process not only gets it wrong, the analysis betrays a fundamental liberal disagreement with the U.S. Constitution.

When asked what he and his fellow delegates to the Constitutional Convention in the summer of 1787 had wrought, Benjamin Franklin responded: “A republic … if you can keep it.”

At the time, the delegates did not yet know if they had succeeded in their efforts to create a new government powerful enough to preserve order, but not one so powerful that it would be able to threaten citizens’ liberty. Success depended on whether or not the constitutional foundation of separation of powers, federalism, and legislative checks and balances would last.

This foundation has proven remarkably resilient for much of our history, yet cracks have gradually appeared over the last hundred years as government expands, liberty contracts, and authority to make important decisions has been taken from the American people by unaccountable bureaucrats and federal judges.

The Times takes issue with efforts to resist this undemocratic trend. Specifically, the editorial casts the suggestion that the Senate has a role to play in deciding who is ultimately confirmed to serve on the Supreme Court as a radical departure from how the American Republic was meant to work.

It does so by an absurd suggestion that the Senate’s decision not to rubber-stamp a president’s nominee would be equivalent with Al Gore’s refusing to abide by the Supreme Court’s decision settling the 2000 presidential election—had he done so.

This is not how the Constitution works.

As my colleague John Malcolm and I point out in a recent article, both the president and the Senate have a role to play in deciding who serves on the Supreme Court. Specifically, Article II, Section 2 stipulates that the president “shall nominate, and by and with the Advice and Consent of the Senate, shall appoint Judges of the supreme Court.”

The president nominates justices for the high court, but appointment is contingent on Senate approval of the nominee.

This joint role is central to the proper functioning of our judicial system. It depends on the Senate’s critically evaluating whether or not each nominee will faithfully apply the text of the Constitution and federal statutes as they are written.

Because senators swear an oath to “support and defend the Constitution,” they are obligated to reject those nominees who they believe would fail to adhere to this simple standard.

Yet, this is the argument with which The Times takes issue. It singles out scholars, such as Ilya Shapiro, who have simply observed that the Senate has the constitutional authority to decide not to confirm a president’s nominee if it so chooses.

As much as The Times might otherwise wish, only the Senate can decide how to exercise its role to advise and consent.

Any argument to the contrary is necessarily premised on the implicit assumption that the Senate owes a certain degree of deference to the president’s judicial nominations. Such deference would upend the delicate balance achieved by the confirmation process spelled out in the Constitution.

Madison observed, “The relation between the Senate and House … is sufficiently analogous to illustrate that between the Executive and Senate in making appointments.” The two relationships, he said, “are in like manner independent and co-ordinate with each other.”

Any other understanding would undermine the separation of powers, as well as the independence of the judiciary, by giving the president disproportionate influence over its composition. It would also risk transforming the Supreme Court into the kind of “political body” that The New York Times ostensibly fears.

Refusing to confirm judicial nominees who will not adhere to the Constitution is precisely why the Senate was given a joint role in the confirmation process along with the president in the first place.