Number of Terror Plots in US Continues to Grow 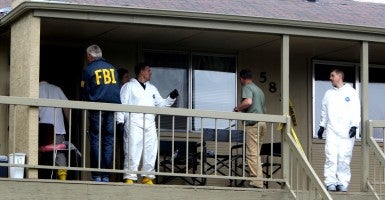 Federal authorities search an apartment in Boise, Idaho on May 16 2013 in relation to the arrest of Fazliddin Kurbanov. (Photo: Joe Jaszewski/Idaho Statesman/MCT/Newscom)

The number of Islamist-inspired domestic attacks (and plots) on the United States since Sept. 11, 2001, continues to grow. The Department of Justice has released information on two past instances that bring the total number of plots and attacks to 83.

The FBI has been investigating Khalil Abu-Rayyan since May 2015. According to a criminal complaint released on February 4, 2016, Abu-Rayyan told confidential sources he planned to attack a 6,000-congregation church in Detroit, Mich.

On more than one occasion, Abu-Rayyan noted his affinity for the Islamic State (ISIS) on social media. He told confidential sources he owned an AK-47 with a 40-round magazine, noting that ISIS fighters carried AK-47s. He also owned a six-shot revolver.

Abu-Rayyan explained that he didn’t continue his plan of attack because his father found his rifle, and he wouldn’t commit to the attack with just a handgun because he would have to reload every six shots. He was arrested on Oct. 5, 2015, for a traffic incident during which police found him in possession of marijuana and carrying a concealed weapon without a permit.

He stated afterward to confidential sources how he wanted to kill the arresting police officer. He also wanted to commit a “martyrdom operation” at the hospital where the arresting officer was later located due to unrelated health reasons.

The Heritage Foundation is also adding the case of Fazliddin Kurbanov, who was arrested in May 2013 for planning to attack military bases in Idaho, Texas, and New York with remotely detonated bombs. Due to the date of the arrest, Kurbanov will be chronologically added as our 61st domestic terror plot.

Kurbanov had been in contact with the Islamic Movement of Uzbekistan, which has links to the Taliban. Kurbanov was sentenced in Idaho to 25 years in federal prison.

With these two additions, 72 out of 83 plots or attacks since 9/11 have been homegrown. The U.S. must remain vigilant in countering terrorists at home by emphasizing community outreach.

This piece has been updated to state that Abu-Rayyan was arrested on Oct. 5, 2015.