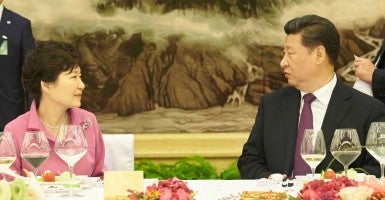 The fact that a single landmine explosion could push the Koreas to exchange artillery fire and create a semi-state of war shows the precariousness of peace on the Peninsula.

Hopefully, Park can convince Xi of the need for China to more fully implement U.N. sanctions as well as pressure Pyongyang.

Both Koreas reached an agreement last week to step back from the precipice of imminent hostilities and resume bilateral meetings. However, the underlying causes for the confrontation remain, and numerous previous attempts at reconciliation have failed.

It does not bode well that North Korea subsequently denied its expression of regret for the landmine incident, claiming instead that the South “learned a serious lesson [for its] unilateral fabrication of an incident.”

Planned future inter-Korean talks willbe derailed if Pyongyang conducts a missile or nuclear test to commemorate the 70th anniversary of the founding of the Korea Workers Party on October 10, as some experts predict.

South Korea will need to carefully prepare its public message so as not to be perceived as acceding to what many believe will be Beijing’s over-the-top Japan-bashing.

China seems to be trying to deflect international attention from its recent belligerent actions in the East and South China Seas and other troubles at home by claiming that Japanese Prime Minister Shinzo Abe’s defense reforms reflect a resurgence of 1930s militarism.

Failure by Seoul to distance itself from such a message in Beijing could impair recent efforts to improve strained South Korean-Japanese ties.

While meeting with Xi is a good idea, Park’s attending the parade extolling China’s military forces is not. Senior Secretary for Foreign Affairs and National Security Ju Chul-ki explained that South Korea expects China to “play a role in facilitating peace and stability and a peaceful unification of the Korean Peninsula.”

However, China is the most recent country to have invaded South Korea and is responsible for the continued division of the Korean Peninsula.

U.N. forces had defeated invading North Korean forces and reunited the Koreas by reaching the Yalu River in 1950. Chinese military forces intervened to drive U.N. forces back until eventually an armistice was signed in 1953 to end hostilities and re-divide the peninsula along the present-day Military Demarcation Line. Chinese intercession extended the war and led to great South Korean casualties and destruction.

Instead of refusing to hold summit meetings with Xi, or requesting an apology from China for its incorrect historical view of the 1950-53 Korean War, or for the deaths of South Koreans resulting from the Chinese invasion during the war, Park has instead refused to meet with Japanese Prime Minister Abe due to differences over Japan’s apologies for its 1910-1945 occupation of the Korean Peninsula.

In Beijing, Park and Xi agreed to hold a trilateral summit with Japan this Autumn. That may lay the foundation for Park to finally have her first summit with Abe.

Seoul and Washington should take care to counter South Korean media speculation that the U.S. is angry at its respected and trusted ally for attending the Chinese event or that Park’s participation will cast a shadow over the October 16 U.S.-South Korean summit meeting.

It is certainly true that it’s a bad idea for Park to attend the parade, but in the end, attending it is not a problem for the alliance between the U.S. and South Korea.

The U.S.-South Korean summit will be an opportunity for Presidents Park and Barack Obama to again affirm their shared values, great friendship, and commitment to the joint defense of peace and stability in Asia.