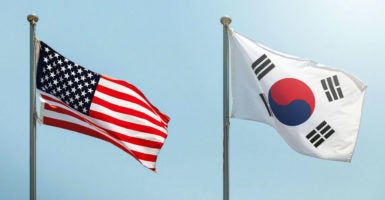 U.S. and South Korean officials have announced a revised trade deal, despite the president's threats to scrap it. (Photo: ByoungJoo/Getty Images)

President Donald Trump derided the U.S.-Korea Free Trade Agreement as an “unacceptable, horrible deal” and a “job killer.” He vowed to “renegotiate that deal or terminate it.”

The South Korean trade ministry responded by declaring “the U.S. is not the only one who can use scrapping the [free trade agreement] as a negotiating tactic.”

Despite these mutual threats, Washington and Seoul announced in late March that they had reached agreement in principle to amend the trade agreement. Trump declared the revised accord a “wonderful deal with a wonderful ally.”

Achieving the accord is good news, because it removes a major source of bilateral tension as the two allies strive for commonality in their approaches to North Korea.

But what did the Trump administration achieve that caused it to embrace a trade deal it had previously renounced? It turns out that it wasn’t much, and hardly worth the bombastic language and risking a rift in the important relationship with longtime ally South Korea.

On automobiles, the Trump administration got precisely the same provisions that President Barack Obama attained in December 2010. Seoul acquiesced to allowing an additional 25,000 U.S. cars to enter the country without having to meet South Korea’s more stringent environmental safety standards, as well as extending the 25 percent protectionist tariff on Korean pickup trucks for another 20 years.

Similarly, the Obama administration bargained for an initial tranche of 25,000 U.S. cars to be exempt and extending the truck tariff from 2014 to 2021.

Trump’s revisions will have no actual economic benefit for the United States, since only 11,000 U.S. cars were sold in South Korea last year and, as South Korean Trade Minister Kim Hyun-chong noted, “no [South Korean] companies are currently exporting domestically produced pickup trucks to the U.S.”

In 2010, The Heritage Foundation criticized Obama’s demanded auto revision as “reward[ing] narrow U.S. special interests [and] capitulating to U.S. auto demands … . The Obama administration and the auto industry claim that the provisions were to create more equitable trading conditions. The reality, however, is that the supplementary agreement simply boils down to greater protectionism for the U.S. auto market.”

The 2018 revision also enables South Korea to purchase a permanent exemption from Trump’s recently imposed 25 percent tariff on steel in return by accepting a lower quota of steel exports to the United States—approximately 70 percent of last year’s figure.

Trump imposed the new restrictions on steel imports under the guise of national security, but was instead clearly intending to manage trade with South Korea for economic purposes.

But there is another problem with this. World Trade Organization rules forbid voluntary export-restraint agreements. So, the final deal between the U.S. and South Korea may not be the final word on the issue.

Reportedly, the two sides have also reached a related, but separate, agreement in principle on export-enhancing currency manipulation.

Domestic trade barriers such as tariffs and voluntary export-restraint agreements are like a tax on American consumers and businesses, since they cause higher prices on goods and cause job losses. Steel tariffs imposed in 2002 cost 200,000 Americans their jobs.

U.S. trade policy should instead be focused on lowering trade barriers rather than benefiting one U.S. industry or interest group over another. The Heritage Foundation’s annual Index of Economic Freedom shows the strong relationship between lower trade barriers and greater economic prosperity.

The final status of the agreement is now somewhat uncertain since Trump declared, “I may hold [the U.S.-South Korea free trade agreement] up until after a deal is made with North Korea … . You know why? Because it’s a very strong card.”

It is unclear whether Trump is holding a trade agreement with a valued ally hostage to an unrelated denuclearization accord with North Korea to pressure Seoul to retain a tough stance during the upcoming inter-Korean summit.

That’s neither how to run trade negotiations, nor treat an ally. But it may at least dodge a bullet and get us back to square one with an important partner.