Conserving, Advancing Freedom Is Central to South Korea’s Alliance With US 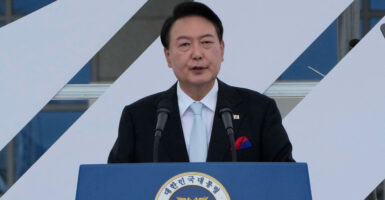 In his Aug. 15 Independence Day speech marking the 77th anniversary of the end of Japanese colonial rule over the Korean Peninsula, South Korean President Yoon Suk Yeol underscored the fundamental importance of freedom to his country.

“As we celebrate the 77th Liberation Day, we must remind ourselves of the historic significance of this independence movement that encompasses the past and points towards the future,” Yoon said, adding:

Our independence movement is a dynamic process. … It is about restoring, defending, and promoting freedom, as well as fighting new threats to freedom, all in full solidarity with, and working alongside, global citizens with the goal of achieving global peace and prosperity.

Indeed, the importance of preserving and advancing freedom that Yoon laid out is the essential pillar of the enduring relationship between the United States and South Korea. And that unique and proven partnership deserves to be elevated and deepened through greater practical cooperation on security and economic fronts concerning mutual global interests and challenges.

In a broader context, the United States and South Korea have enjoyed a strong alliance that’s considered one of the cornerstones of stability and security in Northeast Asia and beyond.

As South Korea’s foreign minister, Park Jin, put it, “Korea now envisions an initiative to serve as a ‘Global Pivotal State,’ and we call it ‘GPS.’ We hope that this ‘GPS’ could guide us into the wider world and into a closer alliance with the United States to contribute to peace, freedom, and prosperity.”

While the alliance has provided the basis of a broad and mutually beneficial economic partnership for the past half-century, many Americans might be surprised to learn that Korea actually entered into a Treaty of Peace, Amity, Commerce, and Navigation with the United States in 1882.

That was Korea’s first treaty with a Western power, and during this long and sometimes rocky relationship, the two allies have come together in cooperation when strategic interests have converged.

The U.S.-South Korea bilateral relationship, anchored in the 1953 Mutual Defense Treaty, is one of the strongest and most successful built by America since the end of World War II.

Once a recipient of U.S. development assistance, South Korea has become one of the most competitive economies in the world, and notably transformed itself from a security consumer to America’s capable and reliable partner of providing security to other nations.

In other words, America and South Korea have been willing and capable partners on behalf of liberty, and have shared enduring confidence in human rights, representative governments, and free enterprise.

In preserving and enhancing the free world, a sound, effective foreign policy requires both strength and focus. Forging greater pragmatic cooperation between willing allies requires timely, proactive thinking in terms of setting an elevated trajectory of the alliance.

That’s why South Korea matters to the United States as a global pivotal partner.

Seizing greater strategic clarity and refinement, particularly at this critical juncture of an evolving geopolitical environment, would be a fulfilling way to gain from an ever-evolving partnership on key policy fronts to move the U.S.-South Korea alliance onward and upward.

Yoon, whose presidency marked its first 100 days this week, concluded his Independence Day speech by emphasizing:

When all of us had to endure dark times; when none of us knew what to expect; when no one believed we had a future, we nevertheless forged ahead, believing in the fundamental universal values of freedom, human rights, and the rule of law, and achieved phenomenal growth and prosperity that all of us enjoy today.

He added, “We have become stronger in the process of defending and expanding this freedom.”

Indeed, now is the time for Washington and Seoul, the two key drivers of trans-Pacific stability and peace, to act on that steadfastness and elevate the bilateral relationship to a next level by preserving and advancing freedom.