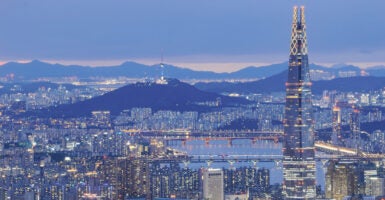 President Joe Biden and South Korea’s President Yoon Suk Yeol are expected to leverage their upcoming summit in Seoul to firm up and broaden the U.S.-South Korea alliance in the face of a number of challenges confronting the two long-time allies. (Photo: Sunho Kim/EyeEm/Getty Images)

Biden, on his first presidential trip to Indo-Pacific, will make his first stop in the Republic of Korea, America’s long-standing ally. Biden and Yoon are expected to leverage their first summit in Seoul to firm up and broaden the U.S.-South Korea alliance in the face of a number of challenges confronting the two long-time allies.

Their first meeting comes in light of the pressing geopolitical context of North Korea’s series of missile launches, China’s growing assertiveness, and Russia’s war in Ukraine, among others.

In light of such a critical foreign policy environment, it is in the clear interest of Seoul and Washington to elevate their decadeslong partnership to a next practical level enhanced by greater strategic clarity and realignment.

Washington’s latest Indo-Pacific Strategy document defines the “strategic ends” of America’s engagement in the region to be the advancement of “a free and open Indo Pacific that is more connected, prosperous, secure, and resilient.”

Toward that, South Korea’s Yoon said he would discuss the U.S.-led Indo-Pacific Economic Framework initiative during his scheduled summit with Biden. Yoon further noted, “We will focus on ways to strengthen global supply channels through the IPEF.”

In fact, South Korea’s economic relationship with the U.S., which has been further institutionalized by a bilateral free trade agreement over the past decade, is underpinned by a strong foundation of shared ideals, enduring people-to-people ties, and close business cooperation led by global companies in both countries.

From a broader perspective, the U.S.-South Korea bilateral relationship, anchored in the 1953 Mutual Defense Treaty, is one of the strongest and most successful built by America since the end of World War II. Once a recipient of U.S. development assistance, South Korea has become one of the most competitive economies in the world, and notably transformed itself from a security consumer to America’s capable and reliable partner of providing security to other nations.

For these reasons and more, working with South Korea to implement the Indo-Pacific Economic Framework is the logical next step for further elevating the already robust partnership between Seoul and Washington, perhaps to a new chapter of strategic forward-adaptive high-tech alliance.

Not ambiguously, the United States and South Korea share a relationship that is truly unique among our closest friends and allies. Many of America’s main alliances today are with countries the U.S. was once forced to fight against. Japan and Germany are obvious examples, but in the early days of the American history, it was with England that we were most often at war. Clearly, adversaries can become friends.

However, Americans and South Koreans have never been enemies. The two countries’ bilateral relationship was forged in the struggles of World War II and, in its aftermath, the struggle against communist aggression from China and Russia. Fighting together against common enemies has indeed forged a lasting, vibrant relationship between the two long-time allies based on mutual respect and common values of democracy, human rights, and economic freedom. Today, the two long-time allies support each other, defend each other, and depend on each other.

To that end, the May 21 Seoul summit between Biden and Yoon deserves to be an elevated transition in U.S.-South Korea relations from that of a purely military and economic alliance to a more far-ranging partnership, particularly elevated by greater strategic clarity and realignment.

Seizing that opportunity would be a fulfilling way to gain from an ever-evolving partnership on key strategic fronts to move the U.S.-South Korea alliance forward and onward together.