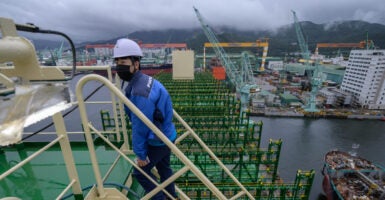 The U.S.-South Korea free trade agreement will hit the 10-year mark on March 15. Pictured: A container ship is anchored at a shipyard in Geoje, near Busan, South Korea, on Aug. 11, 2020. (Photo: STR/AFP/Getty Images)

The free trade and investment agreement between the U.S. and South Korea will hit the 10-year mark on March 15. With bilateral trade having expanded nearly 70% over the past decade, the agreement between the two long-time allies deserves renewed support and greater strategic utilization for years to come.

The economic utility of the resilient U.S.-South Korea free trade agreement has been measurably growing. Since the agreement’s implementation in 2012, bilateral trade flows have increased, with U.S. services exports rising from $6.5 billion in 2012 to over $20 billion.

The agreement has been very beneficial for American farmers, with U.S. agricultural exports to Korea having reached approximately $9.4 billion in 2021.

According to the recently published 2022 Trade Policy Agenda and 2021 Annual Report by the Office of the United States Trade Representative, the agreement has been “an economic boon to U.S. agricultural exporters,” with America’s agricultural exports to Korea in 2021 reaching to approximately $9.4 billion.”

It’s also notable that the U.S.-South Korea free trade agreement has weathered trade tensions between Washington and Seoul and been polished up through modifications since the pact entered into force in 2012. Indeed, that process has made South Korea America’s proven business partner more than ever.

Korea is a valued trading partner and a close ally. The United States-Korea Free Trade Agreement (KORUS) continues to be both a reflection of that close relationship and the foundation upon which we can build to make it even more cooperative. Going forward, we are committed to working with Korea to address our shared concerns, such as supply chain challenges, sustainable trade, emerging technologies, the digital economy, and trade facilitation.

Further enhancing bilateral trade and investment facilitation in the framework of the agreement—particularly to deal with trade uncertainties intensified by the current global geopolitical situation—is critical for the future economic health of the two long-time allies.

From a broader foreign policy perspective, the U.S.-South Korean alliance has been the pillar of peace and prosperity in Asia for generations, particularly given the fact that South Korea’s relationship with the U.S. is based on shared values, people-to-people ties, and business cooperation led by global companies in both countries.

As the years have passed, these shared values and interactions have bound the two nations closer and closer. This is not to say that relations have never been strained. For example, Washington and Seoul have often differed on the best way to deal diplomatically with North Korea. Yet, despite numerous ups and downs—or perhaps thanks to them—South Korea has become a model ally for the U.S.

Indeed, the U.S. and South Korea have much to gain from an ever-evolving partnership by working closer together on key strategic fronts to move the alliance forward. Washington’s latest Indo-Pacific Strategy document defines the “strategic ends” of America’s engagement in the region to be the advancement of “a free and open Indo Pacific that is more connected, prosperous, secure, and resilient.”

In realizing that envisioned objective, South Korea can serve as one of the most reliable lynchpins in dealing with many common challenges. Throughout many trying and challenging times over the past several decades, the notable free market democracy has demonstrated its willingness and resilient capacity to work with the U.S. toward shared goals.

Dynamic trade and investment activities through the agreement have deepened and broadened the economic relationship over the past 10 years. Yet looking into the future, the primary focus should be what more we can accomplish as we look ahead to a brighter future that our two countries will shape.

To that end, South Korea’s latest noteworthy presidential election, which marked a welcome right turn of electing a conservative candidate, offers another unique prospect for further elevating ties between Seoul and Washington.

Seizing that opportunity would be a fulfilling way to celebrate the 10th anniversary of the U.S.-South Korea trade agreement.