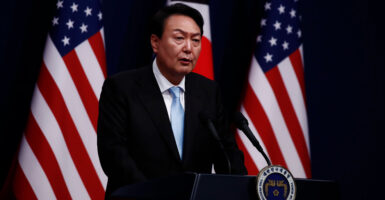 South Korean President Yoon Suk Yeol—seen here at a news conference with President Joe Biden on May 21 in Seoul—will attend a NATO summit next week in Madrid, even though his country is not a NATO member nation. (Photo: Jeon Heon-Kyun/Getty Images)

The U.S.-South Korean alliance has been the linchpin of peace and prosperity in Northeast Asia for generations. Now, that pivotal partnership is about to be elevated to a next level, particularly through South Korea’s greater and more strategic engagement with NATO.

At the invitation of the organization, South Korean President Yoon Suk Yeol will attend the upcoming NATO summit in Madrid on June 29 and 30.

The occasion will be the first time a South Korean president has attended a NATO summit and also marks Yoon’s debut on the multilateral diplomatic stage since he took office on May 10.

Seoul and Tokyo recently pledged to resume a military information-sharing agreement and trilateral military exercises with the United States.

NATO invited to the summit leaders of four non-member countries in the Asia-Pacific region: South Korea, Japan, Australia, and New Zealand. In addition, non-members Sweden, Finland, Ukraine, and Georgia are also participating in the NATO summit as partner countries.

NATO Secretary-General Jens Stoltenberg said in a press briefing alongside U.S. Secretary of State Antony Blinken on June 1 that at the upcoming Madrid summit, member states will “prepare for an age of increased strategic competition with authoritarian powers like Russia and China.”

That includes working more closely with its “partners in the Asia-Pacific and other like-minded partners around the world.”

Blinken noted, “[T]he [NATO] alliance will adopt a new strategic concept, the first one since 2010, to make sure that we’re ready to meet the challenges of today and the challenges that we anticipate for tomorrow.”

From a pragmatic foreign policy perspective, it’s certainly in the interest of Washington to welcome such a timely interaction between America’s Indo-Pacific partners and its key transatlantic allies.

In particular, in addition to attending a session with the leaders of the 30 NATO members and partner countries, Yoon is expected to hold bilateral talks on the sidelines with a number of countries participating in the summit.

In that context, further encouraging practical engagement between South Korea and NATO would be a timely step forward toward maintaining and advancing international order based on shared values and rules.

Indeed, NATO and South Korea have been engaged in dialogue and cooperation since 2005. South Korea is  one of the countries beyond the Euro-Atlantic area—often referred to as “partners across the globe”—with which NATO has been developing relations.

Since 2012, interaction has been advanced through the Individual Partnership and Cooperation Program, which was renewed in November 2019. Political dialogue and practical cooperation are being further cultivated across priority areas, including nonproliferation, cyberdefense, and counterterrorism.

It’s also quite notable that South Korea has become the first Asian country to join NATO’s cyberdefense group. South Korea’s National Intelligence Service has been admitted as a contributing participant for NATO’s Cooperative Cyber Defense Center of Excellence, a cyberdefense hub established in May 2008 in Tallinn, Estonia, focused on research, training, and exercises in the field of cybersecurity.

Yoon has been generating a new sense of optimism and a constructive posture about Seoul’s relations with the United States and its wider international profile.

To that end, opportunities abound for further South Korea-NATO partnership, facilitated by the United States.

Forging greater pragmatic cooperation between willing allies necessitates timely, forward-looking strategic clarity in terms of fine-tuning the trajectory of the alliance and expanding it.

That’s why Yoon’s attendance at the upcoming NATO summit matters. It’s an opportune occasion for Washington and Seoul to demonstrate their global pivotal partnership.