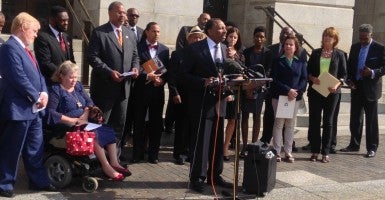 Sanger’s tribute sits in the Smithsonian museum’s “Struggle for Justice” exhibit alongside Martin Luther King Jr. and Rosa Parks, a placement that minister and former Republican politician E.W. Jackson called an “outrage” given her support for eugenics.

“If Margaret Sanger had her way, MLK and Rosa Parks never would have been born,” Jackson said.

Jackson held up a bundle of paper containing 14,000 signatures his group Staying True to America’s National Destiny collected in a petition to remove Sanger’s bust.

He cited her role in paving the way for abortion access, noting a racial disparity in the practice. Despite African-Americans making up only 13 percent of the national population, 37 percent of women receiving abortions are black.

The Smithsonian describes Sanger as “one of the most important feminists of the 20th century” because of her activism in pushing for access to contraceptives such as birth control.

Though the museum acknowledges Sanger’s association with eugenics, it notes the movement, which promoted the “forced sterilization of those deemed mentally unfit,” “for a time was endorsed by many of the era’s prominent thinkers.”

Jackson led a group of prominent black pastors in writing a letter demanding the bust’s removal, pointing to Sanger’s racist statements that he said evoke “the same thought as Hitler.”

“We do not want word to go out that we want to exterminate the Negro population,” Jackson read from a number of Sanger’s documented comments.

A spokesman for the gallery responded to the letter saying the exhibit features multiple people with “less than admirable characteristics.”

The rally is the latest in the conservative battle against Planned Parenthood following the release of undercover videos showing top officials from the organization discussing the sale of fetal organs and tissue.

Planned Parenthood sent a letter to congressional leadership Thursday maintaining the Center for Medical Progress videos are “heavily edited” to “smear” the group.

Texas Republicans Sen. Ted Cruz and Rep. Louie Gohmert have backed the removal of Sanger’s bust, calling the museum’s display “an affront both to basic human decency and the very meaning of justice.”