The Hypocrisy of Denver’s War on Chick-fil-A 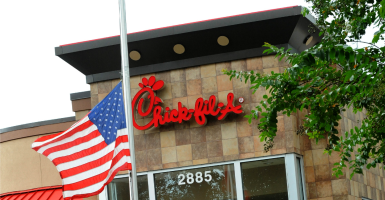 If you're craving Chick-fil-A in the Denver airport, blame the City Council for the fact that you can't get any. (Photo: Paul Hennessy/Polaris/Newscom)

In Denver, city council members are weighing whether Chick-fil-A will be allowed to open in the Denver International Airport.

Denver council member Paul Lopez “called opposition to the chain at DIA ‘really, truly a moral issue,'” according to the Denver Post, while council member Robin Kniech is alarmed about Chick-fil-A’s “corporate profits used to fund and fuel discrimination.”

“Ten of the 13 [Denver city council] members attended Tuesday’s meeting, and none rose to defend Chick-fil-A, although some didn’t weigh in,” reported the Post.

But Cathy, while not changing his views (at least publicly), has changed his tone in the ensuing years. “I’m going to leave it to politicians and others to discuss social issues,” Cathy told USA Today in 2014. Campus Pride executive director Shane Windmeyer told USA Today that he had a “friendship” with Cathy and was “appreciative for the common ground we have established in treating all people with dignity and respect — including LGBT people.”

If the Denver City Council is concerned about the morality of the businesses at the airport, they should take a closer look at two current occupants: Ben and Jerry’s and Starbucks.

Some of the videos’ highlights suggest that Planned Parenthood, which performs around a third of abortions in the United States, hardly represents American values:

— Former StemExpress employee Holly O’Donnell told the Center for Medical Progress that it did not appear all women whose children’s fetal tissue was used gave consent: “If there was a higher gestation, and the technicians needed it, there were times when they would just take what they wanted. And these mothers don’t know. And there’s no way they would know.”

— In the second undercover video released by the Center for Medical Progress, Dr. Mary Gatter, president of the Medical Directors’ Council for Planned Parenthood, joked that “I want a Lamborghini” when discussing prices for fetal tissue.

Liberals, for all their talk about tolerance, have long shown they have no interest in coexistence with Chick-fil-A. In 2012, mayors of major cities across the country denounced Chick-fil-A. “Chick-fil-A’s values are not Chicago values,” said Chicago’s Rahm Emanuel. San Francisco Mayor Edwin Lee tweeted, “Closest #ChickFilA to San Francisco is 40 miles away & I strongly recommend that they not try to come any closer.” Then-Washington, D.C., Mayor Vincent Gray wrote, “Given my long standing strong support for LGBT rights and marriage equality, I would not support #hatechicken.”

Just try to imagine what the reaction would be if say, a Texas town tried to ban Starbucks or Ben and Jerry’s.

Liberals are free to boycott Chick-fil-A, just as conservatives can boycott companies who support organizations who donate to groups advocating stances they find immoral or wrong.

But it’s another matter entirely to bring in the government to ban Chick-fil-A entirely. It should be consumers, not government officials, who decide which businesses thrive and which don’t.