8 Things Obama Got Wrong on the Iran Deal 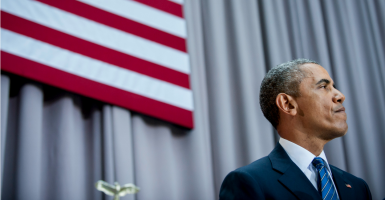 On Wednesday, President Obama continued his push to sell the Iran deal to an increasingly skeptical American public.

This assertion is flat-out wrong.

If the substance of the deal were better, the administration wouldn’t have the problems it now has getting congressional support, along with the support of the American people (a majority of Americans, and Israelis for that matter, continue to favor a diplomatic solution).

The administration negotiated a bad deal, and now a majority of Americans and Congress oppose it.

In reality, the Iran deal undermines previous U.S. nonproliferation policy by rewarding decades of covert and illegal nuclear activities by Iran, including those involving weapons.

Such a belief betrays an unreasonable degree of optimism that Iran will follow the letter of the deal and will not change its mind in the next 15 years.

The deal only slows down Iran’s drive toward a nuclear weapon, and a majority of the deal’s restrictive provisions expire after 15 years.

This means Iran will gradually be able to increase its nuclear material stockpile and advance its enrichment technologies.

Billions of dollars of unfrozen assets, along with access to advanced technologies, will make Iran’s quest for a nuclear weapon much easier.

In reality, the inspections regime is based on the assumption that Iran will comply entirely with the deal.

Even worse, the administration did not submit all components of the deal to Congress, including a critical agreement between the International Atomic Energy Agency and Iran.

In fact, the administration appears not to have even seen it.

Which raises the question: How can the president sell a sanctions regime to the American people, if he has not read all of its components?

American inspectors will not be a part of inspection teams coming to Iran.

Iran will even be allowed to take its own environmental samples, which some in Congress have compared to a fox guarding a chicken coop.

Iran has a history of cheating and lying about its nuclear program, and there is no reason to now believe that it will suddenly change its habits of concealing its nuclear activities.

The deal also assumes that Americans will be better in assessing whether and to what extent other countries have nuclear programs.

American options to verify the deal are limited.

Under the deal, Iran will be given plenty of notice to cover its nuclear weapon activities, particularly those that do not involve radioactive material.

In the past, the United States repeatedly misjudged other countries’ nuclear weapon programs, from the Soviet Union to China to Iraq to Libya.

In the case of Libya, the United States did not even know that the country had a nuclear program until the Libyans showed surprised Americans to their undeclared sites.

The assertion is grossly misleading because the criticism has to do with how little the United States is getting from lifting sanctions on Iran, not with the diplomatic solution per se.

The cruel reality is that the United States and our allies will be the main target of Iran’s “pernicious” activities, as the president calls them.

Sanctions were biting and got Iran to the negotiating table.

In fact, a French negotiator recently recommended that Congress can reject the deal and that the United States will be able to get a better one about two years later.

There is no reason to make Iran’s terrorist activities easier while legitimizing its nuclear program and putting Iran in a strategically stronger position in the next few years, as this deal does.

The choice is blatantly false.

Martin Dempsey, the chairman of the joint chiefs, reiterated that “we have a range of options” should the deal fail, along with Admiral Richardson, the nominee to be the next chief of naval operations.

In short, war would not result from the rejection of the deal.

A war is more likely to result if Iran obtains a nuclear weapon, which the deal makes easier over the long run.

The purpose of politics is to create conditions that make it more likely that a country will win a war. And that is exactly what the Iranians are doing with this flawed agreement.

Fortunately for the United States, there are options other than the deal or a war in the Middle East, despite Obama’s insistence that “we would be standing alone” if this deal fails.

In 2013, Secretary of State John Kerry stated that no deal is better than a bad deal. Despite his reassurances, the administration delivered a bad deal.

The way to fix the situation is to stop promoting the bad deal and rather devote as much effort and political capital to strengthening the sanctions regime.

The sanctions regime is the key to slowing down Iran’s nuclear program. Sanctions were effective, according to the administration.