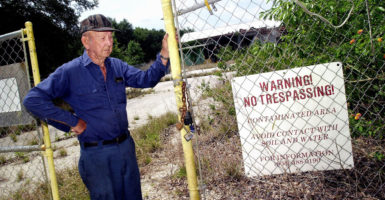 Arthur Hubbard, who once worked for Tower Chemical Co. in Oakland, Florida, stands in 2002 at the edge of the Superfund site on company property. (Photo: John Raoux/KRT/Newscom)

President Donald Trump’s Environmental Protection Agency has cleaned up more polluted or contaminated sites in less time and at a faster pace than the Obama administration did in all of 2015 and 2016, according to an analysis of government records by The Daily SIgnal.

Wednesday marks the one-year anniversary of the EPA’s Superfund Task Force Report, which includes a list of 42 recommendations for federally funded cleanup efforts at hundreds of polluted and even toxic sites.

An EPA press release highlights progress the agency has made in acting on the task force’s recommendations, including “more direct attention to the sites potentially eligible for partial or full deletion” from the federal Superfund list.

Since Trump took office in January 2017, EPA officials have cleaned up all or part of 13 listed sites, compared with nine sites cleaned up by the Obama administration in 2015 and 2016.

A total of 1,345 sites remain on the Superfund list, according to the EPA.

The agency released a video highlighting Superfund success stories from around the country.

In 1980, Congress passed the Comprehensive Environmental Response, Compensation and Liability Act. Widely known as the Superfund program, it provides funds for cleaning up thousands of contaminated sites across the country that include such contaminants as lead, asbestos, dioxin-infused soil, and radiation.

Contaminated locations include industrial facilities, landfills, and mining sites, according to a page on the EPA website detailing the Superfund’s history.

The parties responsible either must clean up the sites themselves or cover the cost of EPA cleanups. If no party is found responsible for contamination, the program provides the EPA with the money and authority to perform the cleanup.

The EPA distinguishes between full and partial deletions of sites from the Superfund list, which the agency uses to identify and prioritize sites that warrant investigation because they are known to have hazardous substances, pollutants, or contaminants.

Full deletions occur from the Superfund list “when all the remedies are successfully implemented and no further cleanup is required to protect human health or the environment.” Partial deletions occur when portions of a site are cleaned up while others require additional remediation, according to an EPA release.

The agency’s annual list of full and partial deletions of Superfund sites shows the Trump administration well ahead of where remediation efforts were during the final two years of Barack Obama’s eight years as president.

The Trump administration potentially could double the amount of sites deleted from the Superfund list in its first two years, in comparison to what the Obama administration recorded in 2015 and 2016.

“For decades, the Superfund program has been a bonanza for lawyers and remediation companies and a bust for the communities in which the sites are located,” Bonner Cohen, a senior fellow at the National Center for Public Policy Research, told The Daily Signal in an email, adding:

Only now, under the Trump administration, has cleaning up contaminated sites and returning them to local communities in a timely fashion and at an acceptable cost become a priority for EPA.

The average time from Superfund designation to completion of cleanup at a site was about 15 years. This means that an EPA employee assigned to the Superfund program could spend a 30-year career at the agency and oversee the cleanup of a grand total of two sites.

This is an absurd waste of public and private resources, and the Trump EPA is to be applauded for bringing sanity to a program where it has been long absent.

The 2018 update to the task force report says that over the next year, the agency will “continue to expedite cleanups and move sites towards deletion.”

Acting EPA Administrator Andrew Wheeler is scheduled to mark the one-year anniversary of the Superfund task force at an event Wednesday in New Bedford, Massachusetts.

“EPA has improved the health, living conditions, and economic opportunity of thousands of people living near Superfund sites over the past year as the agency worked to implement the Task Force recommendations,” Wheeler said in a press release.

“I am proud of the accomplishments achieved by EPA’s hardworking staff, and we will continue to engage directly with stakeholders and communities near Superfund sites to accelerate cleanup and promote economic revitalization. Our plan to complete Task Force recommendations by the end of 2019 will ensure this work continues as one of EPA’s highest priorities.”