What John Kerry Gets Wrong About the Senate, Treaties and the Iran Deal 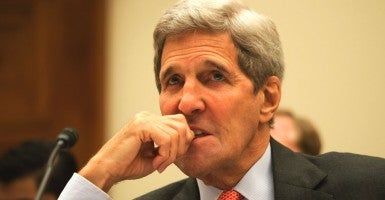 During the administration of George W. Bush, the Senate managed to give its consent to ratification of more than 160 treaties.(Photo: Patsy Lynch/Polaris/Newscom)

At a hearing before the House Foreign Affairs Committee, Secretary of State John Kerry was asked why the administration did not submit the Iran nuclear agreement to the Senate for its advice and consent as an Article II treaty.

Kerry responded that the agreement wasn’t treated as a treaty “because you can’t pass a treaty anymore.”

So a historically important nonproliferation agreement was created as a measly executive agreement not based on principle or standard practice—but solely for reasons of expedience.

This is not a good reason to avoid Senate scrutiny on important international agreements, particularly deeply flawed agreements such as the Iran nuclear deal.

Indeed, if the Iran nuclear deal was palatable, it may have sailed through the Senate since most senators, including the chairman and ranking member of the Foreign Relations Committee, prefer diplomatic solutions to war.

Moreover, during the administration of George W. Bush, the Senate managed to give its consent to ratification of more than 160 treaties.

Indeed, during his own tenure as chairman of the Senate Foreign Relations Committee, then-Senator Kerry ushered through a major arms control treaty with Russia—the so called “New START” nuclear arms reduction treaty.