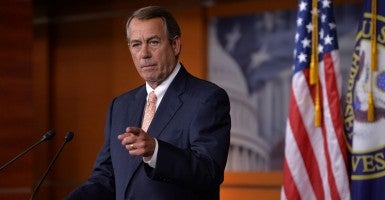 Speaker of the House John Boehner, R-Ohio, has called for an investigation into Planned Parenthood. (Photo: Kevin Dietsch/UPI/Newscom)

Lawmakers have called for an investigation into Planned Parenthood after a video emerged of one of its executives discussing the sale of fetal organs.

Nothing is more precious than life, especially an unborn child. When anyone diminishes an unborn child, we are all hurt, irreversibly so. When an organization monetizes an unborn child—and with the cavalier attitude portrayed in this horrific video—we must all act. As a start, I have asked our relevant committees to look into this matter. I am also calling on President Obama and Health and Human Services Secretary Sylvia Burwell to denounce, and stop, these gruesome practices.

“Life is truly a miracle, and here in the House we have fought and will continue to fight to protect the sanctity of life,” McCarthy said in a statement. “I speak for all of my colleagues when I say I was deeply disturbed by reports and video of an organization engaging in such grotesque and inhumane practices. I will be working with House Committees to investigate the claims made by the employee. We should all agree that no life is expendable, and our society has no place for such callous indifference to life.”

The shocking video released today revealing Planned Parenthood’s engagement in selling baby body parts demands a response from Congress, and we will provide one. Planned Parenthood is the nation’s largest abortion provider, wounding women and profiting off of the death of children, first by dismembering unborn children and then by selling their organs piece by piece. This horrific abuse must stop.

Members of Congress tweeted their support of the investigation.

Have you watched the video?? Honestly hard to believe a human being could bring themselves to believe this is okay. https://t.co/7xrYLh3N8H

The #PlannedParenthood video & discussed barbaric actions are appalling. Our country has no place for such heartless indifference for life.

Proud to stand alongside @LARighttoLife as we fight to protect the lives of the unborn. https://t.co/yejCzTiWht — Rep. Steve Scalise (@SteveScalise) July 15, 2015

Planned Parenthood must be defunded after the horror revealed today. Add your name if you agree: https://t.co/HvfFp7QK1R

The #PlannedParenthood video is horrific and heartbreaking. We need a swift and thorough investigation immediately. #ProLife — Tim Scott (@SenatorTimScott) July 15, 2015

Governors have also called for Planned Parenthood to be investigated within their states.

The Daily Signal reported on Tuesday that Louisiana Gov. Bobby Jindal has directed his state’s Department of Health and Hospitals to investigate allegations against Planned Parenthood.

Today, according to a statement from his office, Jindal sent a letter to Inspector General Stephen Street requesting that he initiate a joint investigation with the Louisiana Department of Health and Hospitals to determine whether Planned Parenthood Gulf Coast is profiting from the sale of fetal body parts.

In a statement, Texas Gov. Greg Abbott also called for an investigation.

“The video of a high-level Planned Parenthood executive discussing the details of internal abortion procedures – including harvesting of baby body parts—is unnerving and appalling,” said Abbott, a Republican. “In light of the video, I have directed the Texas Health and Human Services Commission to conduct an immediate investigation of this alleged practice in addition to a separate investigation ordered by the Texas Office of the Attorney General.”