Ebola Could Be Back This Summer 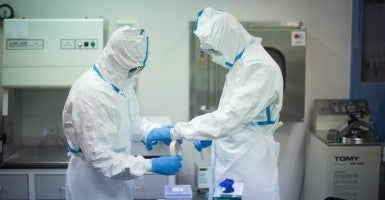 Workers in a laboratory prepare to investigate Ebola samples at the University of Ghana. (Photo: Kay Nietfeld/EPA/Newscom)

Summer is scary. Sharks attack. Hurricanes harry us. Draught and heat exhaustion claim casualties. And, last year there was Ebola. And, Ebola could be back.

In 2014, the unprecedented outbreak of the deadly virus that ravaged West Africa went from interesting news to outright panic when the first case reached American shores.

Controversy over the administration’s response proved as virulent as the danger of the disease spreading outside of Africa. As the number of cases slowly grew, so did the finger-pointing and name calling, including some terse exchanges between the president and the governor of New Jersey.

When the outbreak in Africa subsided, so did public fears. But in the aftermath of the hot mess, assessments of how well Washington responded both here and abroad revealed that there was more to the complaints than just people playing politics with disaster. Washington’s response was deeply flawed.

Studying the U.S. response is more than an academic exercise. There could well be a sequel to last summer. Fresh cases have been reported. Further, there are doubts that the fragile health care systems in West African nations are capable of stemming another outbreak.

What’s worrisome is whether the U.S. is any better prepared to pitch in than it was last time around. Just how well has the Oval Office learned its lessons?

One key question is: How much faith is Washington (or other governments for that matter) putting in the U.N.’s World Health Organization (WHO) to lead the international action? It makes sense for the WHO to coordinate multinational responses to pandemic threats, but the organization was very slow off the mark last time. Local WHO officials in Africa were reluctant to acknowledge the scope of the threat, and by the time the WHO headquarters stepped in and dispatched experienced staff to the region to make realistic assessments it was too late to stop the spread of the disease.

The WHO suffers from the same bureaucratic malaise that strangles most U.N. agencies. In addition, it displays an unfortunate penchant for shifting its focus from the most serious global dangers to the most mundane public health concerns, like anti-smoking and drinking campaigns.

The bottom line: The WHO remains badly in need of reform. Until the organization gets its act together, those dealing with pandemic threats are well advised not to rely too much on the U.N. riding in to save the day.

Here at home, one wonders whether—when facing the next impending crisis—the U.S. government will do any better at communicating risk and response measures than it did during last fall’s Ebola scare. Then, overwhelming criticism of the federal response prompted President Obama to recruit political operative Ron Klain as an “ebola czar.” The appointment seems to have been intended more to blunt the criticism than to improve the nation’s response or public health communications. When the outbreak subsided, the czar quietly drifted away, leaving most to wonder exactly what, if anything, he had done.

Let us hope the government will sound more like it knows what it’s doing the next time around. At least now, there will be a serving surgeon general to coordinate the national response. (The U.S. Senate confirmed Vice Admiral Vivek Murthy’s appointment to the post last December.)

As for the operational aspects of the U.S. response, experts agree there are plenty of issues to be addressed there as well.

One aspect of the response, however, does look to be much improved: The capability of the U.S. military to deploy assistance overseas. Indeed, the main flaw with American aid last time appears to be that the administration waited too long before dispatching requested aid to the region.

Even if Ebola doesn’t make a comeback, there are plenty of reasons why the U.S. ought to get better at responding to pandemics. MERS, for example, recently jumped from the Middle East half way across the world to South Korea.

There is no telling where and when a major threat to the nation’s public health might emerge. And a president who doesn’t handle the threat well could wind up making the problem even worse.