Why Democrats Are Obsessed With Wealth Inequality 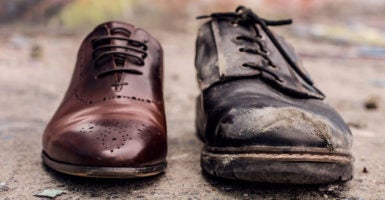 The left tends to see all wealth inequality as an inherent moral problem, regardless of the level of poverty involved. (Photo: iStock Photos)

If you want to understand today’s Democratic Party, a word search of a Democratic debate in 2015 provides a pretty clear picture.

Here is how many times keywords were spoken:

Now, compare the number of times other national concerns were mentioned:

How important is material inequality?

And if it is not that important, why does it preoccupy the left-wing mind?

The answer to the first question is: It depends.

It depends, first of all, on the economic status of the poorer members of the society.

If the bottom percentile society has its basic material needs met, then the existence of a big gap between its members and the wealthiest members of the society is not a moral problem.

But if the members of the bottom rung of society are in such an impoverished state that their basic material needs are not met, and yet there is a supremely wealthy class in the same society, then the suffering of its poorest class renders that society’s inequality a moral problem.

And what most matters in both cases is whether the wealthiest class has attained its wealth honestly or corruptly. If the wealthy have attained their wealth morally and legally, then the income gap is not a moral problem.

In a free society, wealth is not a pie—meaning that when a slice of pie is removed, there is less of the pie remaining. And the poorer members of society have the ability to improve their economic lot.

Through hard work, self-discipline, marriage, and education—and with some degree of good luck—the poor can join the middle class and even the wealthy class.

The latter is generally the case in America. Unlike in most societies, for most Americans being poor is not a fate. The only time being poor becomes permanent is when noneconomic factors render it so.

The left, with its materialist view of life, refuses to concede these nonmaterial producers of poverty and that changing behavior is therefore the only way to raise the majority of the poor out of their poverty.

Of course, when bad luck—such as chronic illness or being the victim of a violent crime—is the reason for one’s impoverished condition, societal help is a moral imperative.

Instead, the left believes that the focus of attention must be on reducing the wealth of the wealthy—again, as if the wealth is a pie.

Thus, the left demands a redistribution of wealth in society—taking money (that was honestly earned) from those who are wealthier and giving that money to the poor.

So, why is the left preoccupied with inequality in a society in which most poor people have the opportunity to lift themselves out of poverty?

Because of its class-based materialist ideology.

Because seeing some people own luxury vehicles, multiple homes, and even private jets while others live in small apartments feels wrong to the left—and leftism is based on feelings.

Because it prefers that the state, not the individual citizen, has as much wealth as possible.

And because when you don’t fight real evils (communism during the Cold War, and now Islamism, Russian expansion, Syria’s use of chemical weapons), you fight non-evils. And material inequality is non-evil.