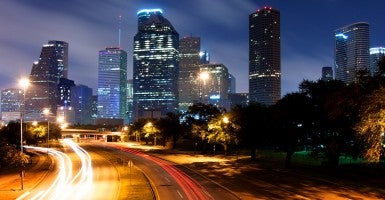 The view of downtown Houston. Since 2009, Texas has added 1.1 million jobs, far more than any other state (Photo: Almond Butterscotch/Flickr/CC BY-NC-ND 2.0) 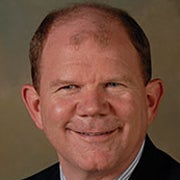 With the charter of the Export-Import Bank of the United States set to expire June 30, its supporters claim its demise would result in the loss of jobs, harm to the economy, and damage to U.S. competitiveness overseas. The truth, however, is that eliminating the billions of dollars of subsidies provided by the bank would greatly benefit U.S. workers and our economy.

Export-Import Bank supporters point to businesses like San Antonio’s Ferra Coffee International to support its continuation. In testimony before Congress, its CEO said that the bank’s Small Business Multi-Buyer Credit Insurance, which guarantees payment of 95 percent of the company’s overseas accounts receivable, has allowed it to pay foreign coffee growers fairly, helping to “prevent families from being broken apart.”

In addition to providing this subsidized insurance, the bank has also benefitted the company by “checking that the distributors with whom we establish relationships and make contracts are legitimate, and that we do not get involved with dubious, unreliable or criminal groups while conducting International Trade business.”

While Ferra Coffee, along with companies like Boeing and General Electric, certainly benefits from these low-cost government services, what about the companies that produce 98 percent of American exports that don’t get subsidies?

Workers in those industries may get paid less. They may lose their jobs, to either domestic or foreign competitors. One example: Delta Airlines estimates that the Export-Import Bank’s subsidies cost the American airline industry up to 7,500 jobs and $684 million each year.

The long-term costs of the bank may be even greater. Many potential new entrants into industries stay away because they can’t compete with the inefficient, subsidized incumbents. The harm to the American economy caused by this loss of innovation can’t be calculated, but it is real nonetheless.

One interesting aspect of battle over reauthorizing the Export-Import Bank is the leadership role Texans are playing in opposition. Rep. Jeb Hensarling, R-Texas, is the leading opponent in the U.S. House, while Sens. Ted Cruz, R-Texas, and John Cornyn, R-Texas, have come out against it. Additionally, former Texas Gov. Rick Perry (R) recently made clear his position by opposing the bank.

Why are these Texans steadfast in their opposition to the bank?

Most likely because they have firsthand experience with the alternative approach to growing the economy, the Texas Model.

It’s also very successful. Since 2009, Texas has added 1.1 million jobs, far more than any other state. Its unemployment rate has been at or below the national average for 100 consecutive months. And its share of the population employed is 62 percent, well above the national average of 59.3 percent.

Of course, big government advocates are always on standby to criticize the Texas Model. One critic, pointing to declining oil prices, noted “Texas is looking a lot less miraculous lately than it used to.”

Yet a recent study still ranks Texas’ five major metropolitan areas in the top 13 nationally—out of 70—as the best locations for jobs.

The biggest problem Texas critics face is their theme that Texas is a “Non-Miracle” because its economic growth is based largely on energy production and high oil prices. This ignores the fact that Texas’ energy production is a result of the Texas Model. California, Florida, and even New York have large energy reserves that sit untapped because of heavy environmental regulation. New York, for example, has generally banned fracking, whereas Texas has banned local ordinances that ban fracking.

The most important take away here is that the Texas Model is not unique to Texas; it’s just one state’s version of the model of limited government provided by the Founders in the U.S. Constitution.

For those worried about the economic impact of ending the Export-Import Bank, the solution is simple; return to our basic constitutional model of government. Reduce the U.S. corporate tax rate, eliminate other corporate subsidies, abolish U.S. tariffs and import quotas, and rein in the U.S. Environmental Protection Agency.

Allowing the bank’s charter to expire would be a good start toward rebuilding a strong U.S. economy.

Originally published by The Hill.