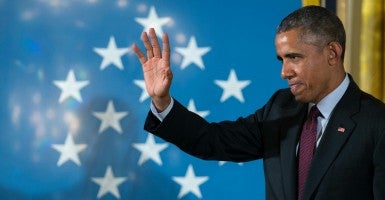 Six years ago, President Obama ran on a promise to end the war in Iraq. Gearing up for the 2012 election, his campaign ran an ad titled, “Ending the War in Iraq: A Promise Kept.”

Two years later, against the context of a fragmented, volatile Iraq, Obama launched a new campaign promising “to degrade and eventually destroy” the Islamic State in Iraq and Syria—the terrorist group better known as ISIS.

ISIS’ brutal tactics and territorial advances have since led people to question the sincerity—and rationale—of the president’s promise, leading to a growing number of Americans who disapprove of Obama’s handling of the terrorist group.

In fact, 55 percent disapprove of Obama’s handling of ISIS, according to a Washington Post-ABC News poll released today. Only 31 percent approve, a 19 percent drop from September’s poll.

James Phillips, the Heritage Foundation’s senior research fellow for Middle Eastern affairs, said Obama’s “poor judgment” in Iraq driven by “short-term political interests” has been evident to regional experts in the region since at least 2011.

“Since the 2008 campaign he consistently has made the case for pulling U.S. troops out of Iraq and has minimized long-term security risks of that policy,” Phillips said. “But the essence of presidential leadership sometimes boils down to telling people what they don’t want to hear and leading them in a direction that may not be popular, but is necessary to protect American national interests.”

By contrast, Americans are split on their favorability of Obama. The poll shows 49 percent view him favorably, while 49 percent do not.