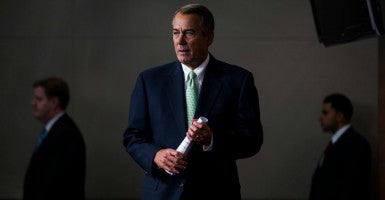 When I had just started to raise a family, and I struggled to make my small business turn a profit, I had to make decisions about what bills to pay based on priorities and due dates. Sometimes, the struggle to balance the checkbook would be a painful one, and we had to do without some things as “luxuries”—even if we hadn’t considered them luxuries before.

This wasn’t some unique experience of mine. Too many Americans these days are forced to make sacrifices to keep the lights on.

But the federal government doesn’t do the same—in fact, it rarely even tries. Instead, the impending Boehner-Obama agreement allows Congress to rack up new debt and guarantees even more spending without putting any checks in place.

This is an insult to the American families whose tax dollars pay their salaries. It is slap in the face to families who are forced to shell out for every single irresponsible spending bill and wrecked entitlement system, because their representatives are too cowardly to tighten the belt and work on some hard reforms.

Instead, the current budget deal keeps our government on a trajectory to spend another $7 trillion more over the next 10 years than it will receive in taxes, according to the Congressional Budget Office. So, like clockwork, Congress raises the debt limit.

Just as credit cards have limits that serve as warning signs for reckless spending, the debt limit is Congress’ self-imposed warning sign that our spending problem needs to be addressed. They’ve ignored it to the tune of $18.1 trillion and counting.

The Boehner-Obama deal has gimmicky savings that will not materialize—if ever—until 10 to 15 years from now. It bails out the Social Security Disability Insurance trust fund by robbing the general Social Security Trust Fund without putting in any meaningful reforms. This is no help to the next generation of retirees.

Insultingly, the deal also turns Overseas Contingency Operations (an emergency spending provision that was meant to help the troops) into a slush fund for non-defense spending. If that disgusts you, welcome to the club—your annual dues are paid every April 15.

Congress hasn’t been forced into this. Better options have been proposed, but they require holding to budget caps and building on them with real spending and entitlement reforms.

Until Washington is forced by the voters into fiscal sanity, American families can expect to continue making those painful budget decisions at home while watching their leaders pile more debt on their heads from afar. Unfortunately, government debt will eventually lead to less opportunity and lower quality of life for all Americans.