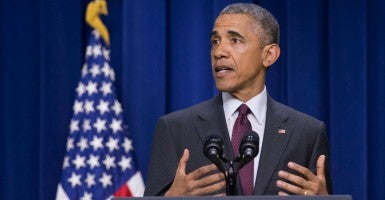 The major regulations imposed by the Obama administration now cost Americans more than $80 billion a year—twice as much as the rules issued by the Bush administration at the six-year mark, according to a Heritage Foundation report released today.

Lawmakers must act on a range of reforms in order to stem the massive expansion of the regulatory state.

The report, “Red Tape Rising: Six Years of Escalating Regulation Under Obama,” documents an increase of 27 major rules in 2014, which brings the administration’s total to 184.

By comparison, at this point during the presidency of George W. Bush, only 76 major rules had been adopted at a cost of $30.7 billion—38.5 percent of the Obama cost total.

The actual cost of the Obama rules is obscured by the failure of agencies to fully quantify the impacts for 12 of the 27 major regulations issued last year. This absence of cost analyses represents a major dysfunction in the administrative process.

The need for reform of the regulatory system has never been greater. The White House, Congress, and federal agencies routinely ignore regulatory costs, exaggerate benefits and breach legislative and constitutional boundaries.

At this point during the George W. Bush presidency, only 76 major rules had been adopted at a cost of $30.7 billion—38.5 percent of the Obama cost total.

Regulation of securities and the banking system dominated rulemaking in 2014, accounting for 13 of the 27 major rules issued, most of which were adopted under the 2010 Dodd-Frank financial regulation law.

The Department of Energy ranked second in the number of major rules issued last year. All six of those rules restrict energy use in items ranging from power adaptors for cellphones and laptops, and coolers in ice cream parlors and grocery stores. The rules alone will cost consumers and businesses hundreds of billions of dollars.

Many more regulations are on the way, with another 126 economically significant rules on the administration’s agenda, such as directives to farmers for growing and harvesting fruits and vegetables; strict limits on credit access for service members; and, yet another redesign of light bulbs.

Among the most anticipated rules is finalization of the Environmental Protection Agency’s stricter standards on emissions of ozone, which many analysts predict will be the most costly regulation ever imposed by any agency.

Congress should take immediate steps to control this excessive regulation and to prevent further harm to the economy, and to the personal liberties of Americans. There is a great need for increased scrutiny of regulations to ensure that each is constitutional and necessary, and that costs are minimized.

The reform agenda should include requiring every major regulation to obtain congressional approval before taking effect, as called for in the proposed REINS Act. Other vital steps include requiring any legislation that imposes new red tape to undergo an analysis of its impact before it can be voted on, establishing sunset dates for all major rules, and subjecting independent agencies such as the Federal Communications Commission and Securities and Exchange Commission to the White House regulatory review process.

Such reforms, by themselves, will not solve the long-standing problem of regulatory overreach. But they represent a down payment toward the goal of reducing the red tape that entangles Americans and the U.S. economy.