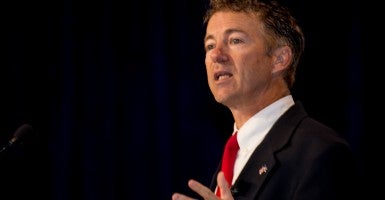 In one of his first campaign stops as an official presidential candidate, Sen. Rand Paul, R-Ky., was asked about his views on abortion legislation.

Paul told reporters, “Why don’t we ask the DNC [Democratic National Committee]: Is it OK to kill a 7-pound baby in the uterus?”

During an interview with the Associated Press, Paul said that “life is special and deserves protection,” but didn’t specify whether or not he supports any exceptions to an abortion ban, such as cases involving rape, incest or a maternal mortality risk.

“The thing is about abortion—and about a lot of things—is that I think people get tied up in all these details of, sort of, you’re this or this or that, or you’re hard and fast [on] one thing or the other,” Paul told the AP.

Paul said he has supported “both bills with and without” exceptions during his time in the Senate.

“In general, I am pro-life. So I will support legislation that advances and shows that life is special and deserves protection,” said Paul.

Later, when pressed by reporters for a more specific answer, Paul said:

You go back and go ask [Democratic National Committee Chairwoman] Debbie Wasserman Schultz if she’s OK with killing a 7-pound baby that’s just not born yet. Ask her when life begins, and ask Debbie when she’s willing to protect life. When you get an answer from Debbie, come back to me.

Wasserman Shultz responded to Paul in a statement:

Here’s an answer. I support letting women and their doctors make this decision without government getting involved. Period. End of story. Now your turn, Sen. Paul. We know you want to allow government officials like yourself to make this decision for women—but do you stand by your opposition to any exceptions, even when it comes to rape, incest, or life of the mother? Or do we just have different definitions of ‘personal liberty’?

Marjorie Dannenfelser, the president of the pro-life Susan B. Anthony List, said in a statement that Paul was right to question Shultz and the DNC.

“The current abortion debate is centered on a highly reasonable proposal to protect children after 20 weeks, or five months of pregnancy—the point at which they can feel excruciating pain. The entire GOP field is unified in support of this legislation, which has already passed in 14 states,” said Dannenfelser.

“While every potential Republican nominee is on record, potential Democratic candidates such as Hillary Clinton are silent,” she added. “Do they support this compassionate, common sense limit on abortion or do they stand by the Democratic Party platform: abortion on-demand, up until the moment of birth, paid for by taxpayers?”

Paul has previously offered his support for pro-life legislation, including the Pain-Capable Unborn Child Protection Act.

A recent Quinnipiac poll shows that 60 percent of Americans, 76 percent of Republicans, 56 percent of independents and 46 percent of Democrats support a ban on abortion after five months.